They have sent a 22-point letter to the partie­s, asking them to includ­e it in their party goals.
By Our Correspondent
Published: April 5, 2013
Tweet Email 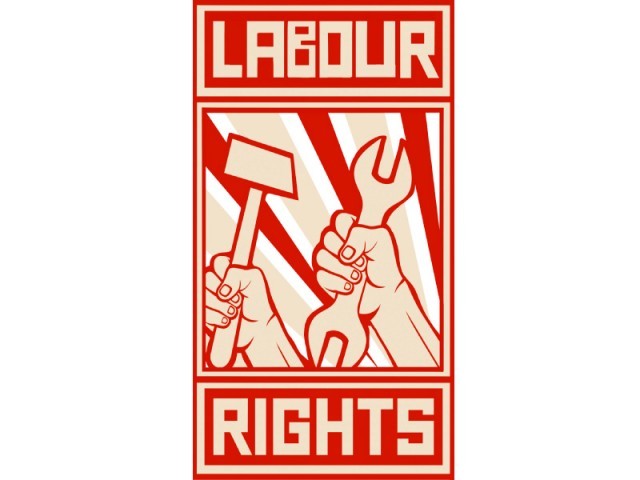 Trade unions have decided to pitch their demands to political parties ahead of the general elections, asking them to include labour rights in their manifestos.

On Thursday afternoon trade unionists and civil society members gathered at the Human Rights Commission of Pakistan’s (HRCP) office to iron out a plan to remind political parties about the plight of the working class. Prof. Mutahir Ahmed, Karachi University Teachers Association’s president and an HRCP member, headed the meeting.

Sheikh Majeed of Pakistan International Airline’s (PIA) trade union read out a 22-point letter which has been sent to political parties, asking them to make it a part of their manifestos. It said that each month, unskilled labourers should be paid Rs25, 000 and skilled workers should get a salary equivalent to the cost of 1 tola of gold. The letter also stated that appointment notices should be issued for workers in the private, formal and informal sectors. EOBI, Workers Welfare Board and Workers Welfare Fund should be shifted from the federal level to the provinces, said the letter. The unionists have also asked for separate seats in the national and provincial assemblies to be reserved for labourers. The government should specify a method and form a separate body at national and provincial level for paying compensation to those affected by catastrophes and riots, added the letter.

Nasir Mansoor, National Trade Union Federation’s deputy secretary, said, “The concept of minimum wages should be done away with now – labourers are humans. We demand sufficient wages for them to live happily and their children have the chance to go to school.”

He voiced his dissatisfaction at political parties’ apathy to the plight of labourers and asked unions to set aside their differences and struggle together for the rights of workers.

Malik Muqadar Zaman, the president of Pakistan Railways Mazdoor Union’s Karachi division, said laws to protect labourers exist, the challenge is to get political parties to implement them. “The role of trade unions has almost been wiped out by the former government which was thought to be a very labour-friendly one,” he said. “Organisations such as PIA and Pakistan Railways have been brought to the brink of closure by the last government.”

The discussion’s participants decided to call a conference and invite all parties to discuss the issue with them. Trade unionist Nawab Ali, Sohail Raza, Mustaq Ali Shan, Ayub Qureshi and Abdul Hayee of HRCP attended the meeting.

Schools: 18 reserved sites to be auctioned