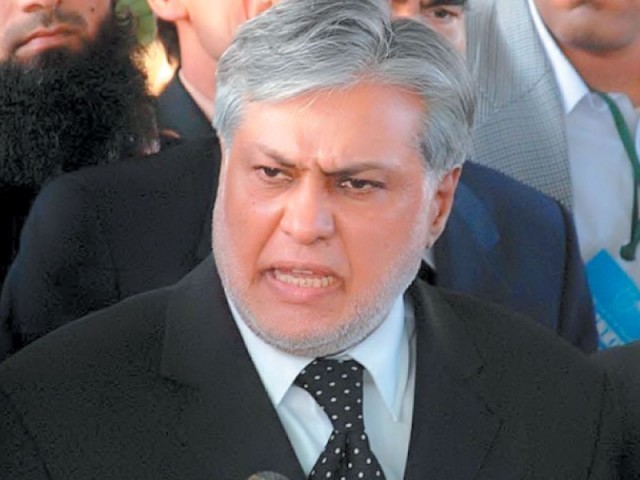 Dar described the promulgation of an ordinance, which will give ‘legal cover’ to the Code of Conduct as “inevitable”. PHOTO: FILE

Senator Mohammad Ishaq Dar, leader of the opposition in the Senate, has demanded that an ordinance be passed to ‘support free and fair elections and for [the] effective implementation of the Code of Conduct’.

In a letter sent to the federal government on Thursday, Dar described the promulgation of an ordinance, which will give ‘legal cover’ to the Code of Conduct as “inevitable”.

Dar’s letter states that the Senate Special Committee on Election, which had worked on the Code of Conduct with the Election Commission of Pakistan, had expressed some concerns about it, the biggest of which was that a legal cover was missing when it came to a majority of the guidelines.

The committee, he says, had recommended that offences be declared non-bailable and punishable by up to seven years imprisonment.

Except for some provisions of the code, says the letter, a substantive part is “merely moral”.

For example, it points out, the section which states that no transaction towards the election expenses shall be made through an account other than the account opened for the purpose, has no legal remedy if it is violated.

Similarly, the code prohibits funding election advertisements from the public exchequer as well as the use of state media for partisan coverage of news and publicity by the federal, provincial and local governments, says the letter.

The code also forbids workers of political parties from pressuring the print and electronic media or resorting to violence against the media. However, no legal backing is available to these provisions, says Dar.

The ban on celebratory firing into the air and the use of fire crackers and other explosives at public meetings and at or near the polling stations is also not backed up by a law, the PML-N senator has stated.