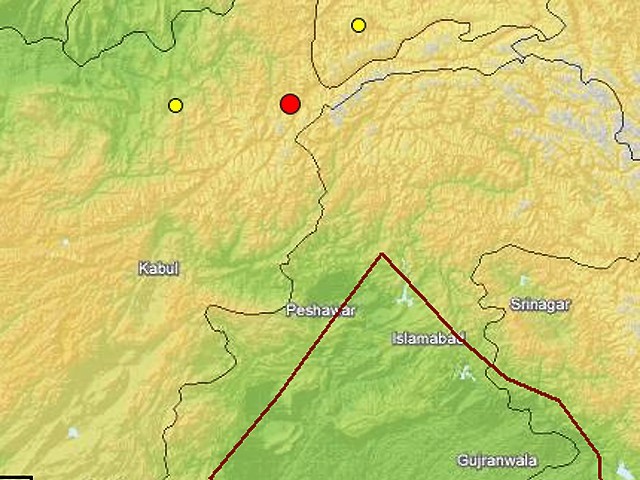 ISLAMABAD: Earthquake tremors were felt in parts of Khyber-Pakhtunkhwa and Punjab, Express News reported on Thursday.

The earthquake was felt in Islamabad, Abbotbad, Haripur, Mianwalli, Shagla, Swat, Malakand, Peshawar and Rawalpindi, and as far as Kashmir, Nowshera and Lahore.

The tremors have left people in many areas in a state of panic and shock.

The epicentre was on the Afghan-Tajikistan border at a depth of 225 kilometres (140 miles), senior Pakistani meteorological official Hazrat Mir told AFP.

The quake was felt across northwestern Pakistan, Islamabad and in parts of Pakistan’s central Punjab province, he said.

The US Geological Survey measured the quake at a magnitude of 5.4 in the Hindu Kush region of Afghanistan.

Pakistan was hit by a 7.6-magnitude earthquake on October 8, 2005, that killed more than 73,000 people and left about 3.5 million homeless, mainly in Pakistan-controlled Kashmir and parts of Khyber Pakhtunkhwa.