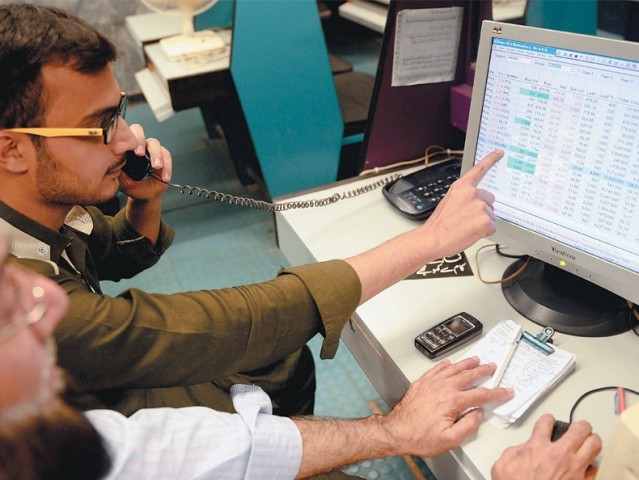 In the black: 197 the number of stocks whose prices went up. PHOTO: AFP/FILE

KARACHI: Investors at the Karachi bourse open the week with bullish intent, pushing the index to close at an unprecedented record level of 18,250, supported by a lower inflation rate for March and interest in the oil, fertiliser and cement sectors. Moreover, the end of the nomination process ahead of May 11 general elections also boosted confidence.

According to the Pakistan Bureau of Statistics on Monday, inflation eased to 6.57% in March year-on-year, from 7.4% percent in February, which was better than expectations, however investors were not too excited as analysts believe interest rates have bottomed out and many expect a hike in the State Bank of Pakistan’s next monetary policy statement, said Faisal Bilwani, analyst at Elixir Securities.

Pakistan State Oil saw a muted rally after the government notified an increase of Rs0.25 per litre on margins of motor spirit and Rs0.1 per litre for high speed diesel.

Bank of Punjab was the star performer of the day, hitting its upper lock, after announcing earnings per share of Rs3.09 for the year ending December 2012 against Rs0.66 in the corresponding period of last year.

Foreign institutional investors were net buyers of Rs195.49 million, according to data maintained by the National Clearing Company of Pakistan.