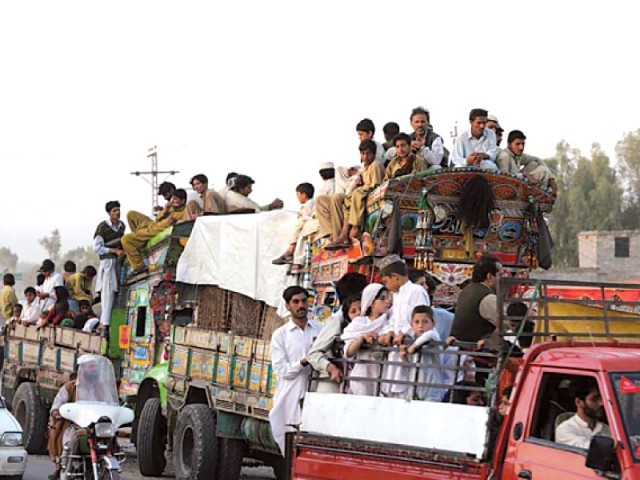 Conflict and natural disasters have created repeated waves of displacement along the border. PHOTO: IRIN

Around 40,000 residents of Tirah valley, have fled their homes after fighting in the last few weeks, according to the Federally Administered Tribal Areas Disaster Management Authority (FDMA). Most of the refugees from the Khyber Agency are heading towards Kohat, Hangu and Peshawar districts in Khyber-Pakhtunkhwa (K-P) or to the Kurram Agency in the tribal belt.

“My wife, my elderly mother and my two brothers walked for over 14 hours to reach safety,” said Abdullah Khan, 30. He is now staying with relatives in Peshawar. He said his wife, seven months pregnant, was “suffering severe stomach cramps”. He and his brothers had carried their mother until they found a truck to give them a lift, as “she is quite frail and unable to walk for more than 30 minutes or so.”

Aid agencies have given similarly harrowing accounts. The Norwegian Refugee Council (NRC) said many had walked for hours “without any access to basic services, such as shelter and water”. The government provided some transport to those fleeing.

“People have suffered tremendously, escaping the violence and struggling for their lives. Most of them left their homes and their livelihood behind without being able to bring any belongings but the bare minimum to sustain the journey out of the valley,” NRC Country Director Saeedullah Khan said.

According to the Geneva-based Internal Displacement Monitoring Centre, some 750,000 persons are already internally displaced in Pakistan due to conflict and natural disasters.

The “escalation of hostilities in the Bagh Maidan area has resulted in the displacement of over 5,200 families (40,600 individuals). The displacements started mid-last week. Most of the internally-displaced persons (IDPs) are children (46 per cent) and women (32 per cent),” according to an update by the UN’s Office for the Coordination of Humanitarian Affairs (OCHA), citing information from the FDMA.

Fighting between government soldiers and militants in the valley, which has strategically important routes into Afghanistan, has been underway for several months, but intensified recently with militants seizing control of key areas.

The conflict is a complicated one, involving at least three militant groups that also have internal divisions. The humanitarian community is setting up operations to register the 40,000 IDPs and providing assistance at the New Durrani, Jalozai and Togh Sarai IDP camps, said Jean-Luc Siblot, the Acting Humanitarian Coordinator for aid agencies in Pakistan and the World Food Programme’s country representative. “Expectations are that the caseload is likely to grow and tensions will continue. Agencies are monitoring the situation closely,” he said.

Those fleeing have not always ended up in safer places. A car bomb blast at a food distribution point at the Jalozai Camp last week left 17 dead and many others injured.

The District Police Officer Muhammad Hussain, told IRIN, “Wwe believe the blast may have been carried out by militants targeting tribespeople who opposed them and fled their villages as they moved in to capture these areas.”

The security threat is making it more difficult for humanitarian groups to provide aid. “The humanitarian community is monitoring the situation and stands ready to start humanitarian assistance to the IDPs as soon as the government puts in place the security mitigation measures,” said the OCHA update.

“We have received no help at all, and don’t know what to do. We could bring nothing with us, and have no clothing, food, documents or cash,” said Khan, who is also trying to seek urgent medical attention for his ailing wife and work out what to do next.