Three member commit­tee has been asked to report its findin­gs within fiftee­n days.
By Our Correspondent
Published: March 31, 2013
Tweet Email 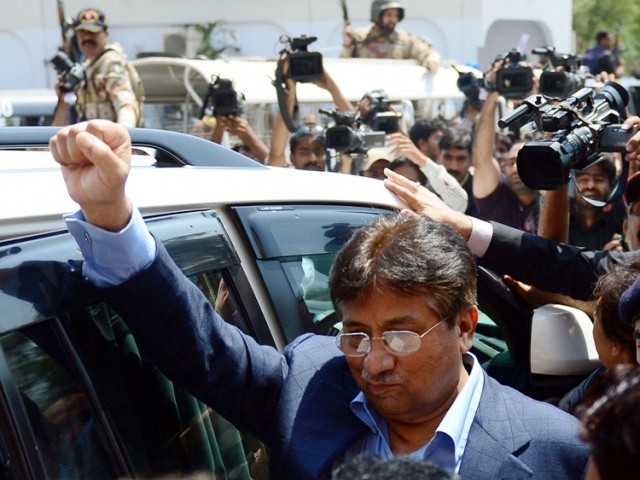 Former president Pervez Musharraf punches the air after appearing at the Sindh High Court in Karachi on March 29, 2013. PHOTO: AFP

The Sindh High Court Chief Justice Mushir Alam took notice of the shoe thrown at former President Pervez Musharraf on his visit to the court. He also took notice of the manhandling of the lawyers and journalists by the law enforcers on the SHC premises on Friday.

Justice Alam has constituted a three-member committee, comprising the court’s inspection team member, Kausar Sultana, SHC Bar Association President Mustafa Lakhani and an officer from the court’s IT department to hold an inquiry. The committee has been asked to report its findings within fifteen days.

CM Alavi pledged that all possible steps will be taken to maintain the law and order. He also promised adequate security for the election commission staff and sessions judges, who would be performing duties as returning officers on the polling day.