‘Don’t burn this house. It belongs to a Muslim’

‘Don’t burn this house. It belongs to a Muslim’ 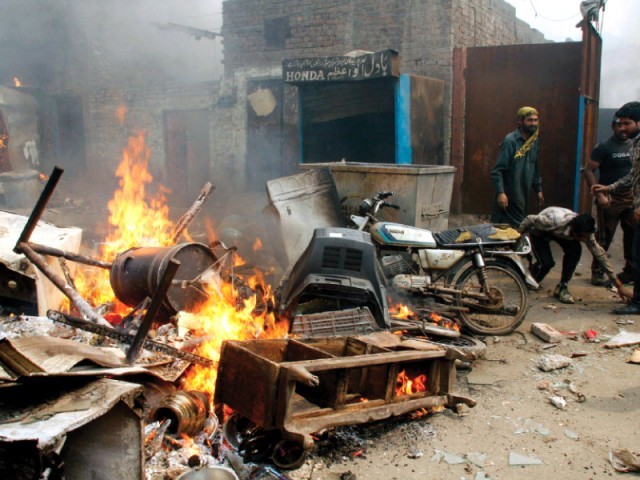 They fled the locality during the riots after the police assured them that they would protect properties. PHOTO: ABID NAWAZ / EXPRESS

While most of the two hundred houses set on fire in Joseph Colony have been rebuilt, the shattered confidence of the residents will take more time to be picked up.

Nevy Samuel, 28, was one of the inhabitants who saw her house attacked by angry mob over an alleged act of blasphemy committed by Sawan Masih.

“It’s not easy being a Christian. All my life, I have heard remarks like ‘woh dekho, eesai guzar rahi hai’ (look, that’s a Christian passing by),” she says. “But this incident has brought the (level of) discrimination to a peak.”

In the aftermath, the fear is now even more deeply embedded into the community’s psyche.

“Though everything is normal now, I feel that simply being a Christian is an invitation to danger,” says Samuel. “When I pass through the lanes without my husband, my heart keeps pounding because of fear.”

Samuel is a mother to a four-month-old daughter – a normal, contributing member to society. Yet, now she feels like a second-class citizen.

“We were told by some Muslim neighbours that our house had burnt to the ground. They advised us not to come back. When we finally did, all we found were ashes,” she recalls. “This happened just because I am a Christian. Being a Christian isn’t a crime, is it?”

According to Samuel, they fled the locality during the riots after the police assured them that they would protect properties.

The chants and loud proclamations they were subjected to while escaping – we will get rid of Christians, we will teach them a lesson – still ring in her ears.

“I saw people burning our house before my very own eyes,” said Patras. “They wanted to burn us in the house but some Muslim friends managed to get us out in time. My father suffered a mental shock and, since then, hasn’t regained his senses.”

Thanks but no thanks: Talat Hussain turns down information ministry