Inside the saas-bahu wars

Inside the saas-bahu wars

What goes on when a saas and bahu live togeth­er under one roof?
By Saadia Qamar / Creative: Jamal Khurshid
Published: March 28, 2013
Tweet Email 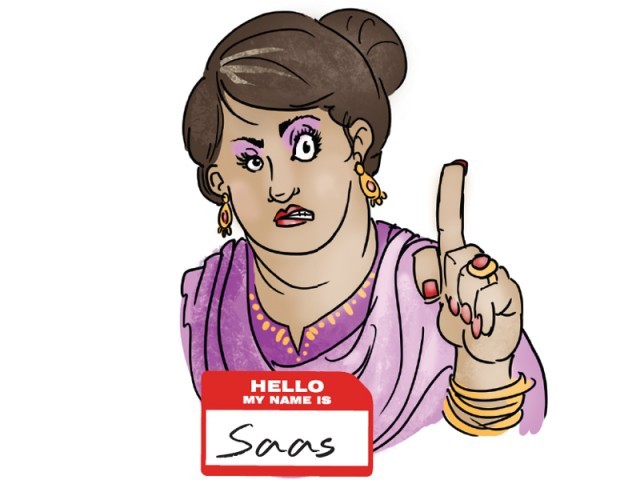 What goes on when a saas and bahu live together under one roof. ILLUSTRATION: JAMAL KHURSHID

You can trust a saas and bahu to fight over anything; from the length of your kameez to the maid’s afternoon nap timings, any daughter-in-law can testify that her mother-in-law can sometimes be a monster.

Sometimes, an angelic saas ends up with a sinister bahu and at other times, a naive bahu gets stuck with a mischievous saas who doesn’t leave any opportunity to embarrass her. Rarely do we find a home where the two women of the house live together in perfect harmony. We talked to women who play both roles to see how the discord deepens.

“My saas has always lived with me — one by one, all her sons got married and shifted to their own places — and for some reason, she’s always been really jealous of me,” says Farina Imtiaz, who has been married to Imtiaz Khan for 25 years and also happens to be the eldest daughter-in-law in the family. “She is jealous, but when she’s down sometimes, she looks to me [for help].” Farina feels it’s a shame her mother-in-law’s jealousy still hasn’t ended, but is happy that her extended family appreciates and loves her. She adds that earlier on in her relationship, she was too terrified to tell her mother-in-law even when she visited her own mother, for fear of a nasty reaction. She hopes to build a healthy relationship with her own future daughter-in-law and prays they can live happily as friends.

Safiya Razzaq, another young bahu, feels the chemistry between the two ladies all depends on the groom’s behaviour. He needs to balance things out — be a good son as well as a good husband and not one, at the cost of the other. “He must know first-hand how to manage his mother and also look after his wife. If he doesn’t, then things will fall apart,” she sighs. This bahu has been married to husband Razzaq ul Haq for almost three years and feels she now understands the intricacies of marriage. She strongly feels that every member of the joint family system has a role to play and it’s not just the newly-wedded bride’s job to make all the sacrifices.

Being a saas as well as a bahu, Sughara Khalid sheds light on other issues altogether. “Today’s bride doesn’t give time to her new family,” she says, adding that the wife is never really there when her husband leaves for work or when he returns home. She feels that, back in the day, men were not accommodating and today, they are very understanding. “In-laws wala chakkar nahi hai [it’s not about the in-laws]. Most of the time, it’s the couple that just doesn’t get along,” she adds. “They have problems which cannot be resolved.”

Reminiscing over the days when she was a newlywed young bahu, Khalid says, “We had problems too with our mother-in-laws, but it was all sorted out by the end of the day.” She feels a husband and wife were honest with each other and that’s all that mattered. Also, complaints couldn’t be as easily forwarded to others as they are today (via sms). “Today’s bahu doesn’t know where to draw the line,” says Khalid.

Saas-bahu conflicts, however, aren’t present in every household as young bahu Saima Ismail, who got married two years ago, says, “It’s always the brothers who are up against each other — the ladies in the house never fight.” One problem which has made her a laughing stock in the family, however, is her post-pregnancy weight — but it’s all in good humour, she says.

Then there are mother-in-laws like Rehana Ahmed who love their children unconditionally. “People tell me I have spoiled my bahu completely and say ‘tumhey tau saas banna hi nai hai ata’ [you don’t know how to be a saas],” she says. “But I don’t believe in nagging her. I feel she should spend most of her time with her young daughter, just like I did when my sons were young.” She gives her bahu space just like she was given space by her saas — don’t we all want more of these mother-in-laws in our lives?

*Names have been changed

Before elections, Gravity shows you the ‘Karwa Sach’ about people in power