The book titled I am Malala, will be publis­hed in autumn this year.
By News Desk
Published: March 28, 2013
Tweet Email 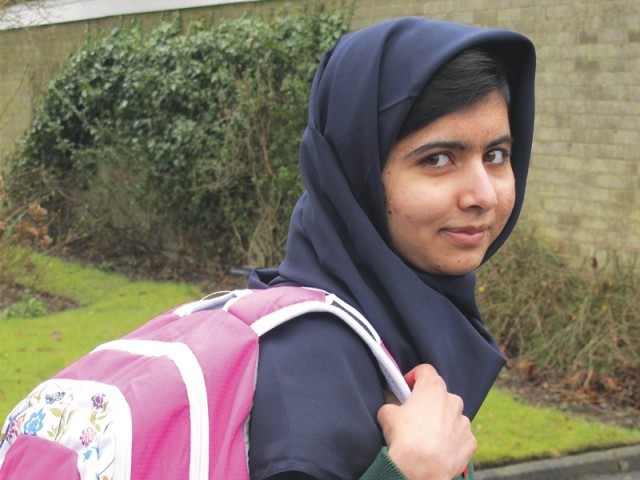 Malala will begin writing a blog on the BBC Urdu service under a pseudonym about life in the Swat. PHOTO: REUTERS/FILE

Fifteen-year-old Malala Yousufzai, the child activist from Swat who caught the international media’s attention when she was shot by the Taliban last year, is penning a book on her tribulations.

The book titled I am Malala will be published in autumn in a deal worth around £2 million, according to The Guardian. Malala hopes to share with the world her struggle for women’s education in Swat Valley. After being treated for her injuries in the United Kingdom, Malala now attends school in Birmingham.

“I hope this book [I am Malala] will reach people around the world, so they realise how difficult it is for some children to get access to education,” she said in a statement.

“I want to tell my story, but it will also be the story of 61 million children who can’t get education,” she continued. “I want it to be part of the campaign to give every boy and girl the right to go to school. It is their basic right.”

The book will be published globally by Little, Brown Book Group and by Weidenfeld & Nicholson in the UK and Commonwealth.

Additionally, Malala will begin writing a blog on the BBC Urdu service under a pseudonym about life in the Swat in 2009, when the Taliban’s network was increasing and they banned girls from going to school and Pakistan Army fought to re-establish control in the region.

For being an advocate for woman’s education, she was nominated for the International Children’s Peace Prize and in December 2011 she was awarded Pakistan’s first National Youth Peace Prize by Archbishop Desmond Tutu. After the shooting, Malala has been awarded several peace prizes and is the youngest person to be nominated for the Nobel Peace Prize. United Nations Secretary General Ban Ki-Moon  announced that the UN will celebrate Malala Day on 10 November.

In the book, she writes, “I come from a country that was created at midnight. When I almost died, it was just after midday. It was Tuesday, October 9, 2012 — not the best of days as it was the middle of school exams, though as a bookish girl I don’t mind them as much as my friends do. We’d finished for the day and I was squashed between my friends and teachers on the benches of the open-back truck we use as a school bus. There were no windows, just thick plastic sheeting that flapped at the sides and was too yellowed and dusty to see out of, and a postage stamp.”