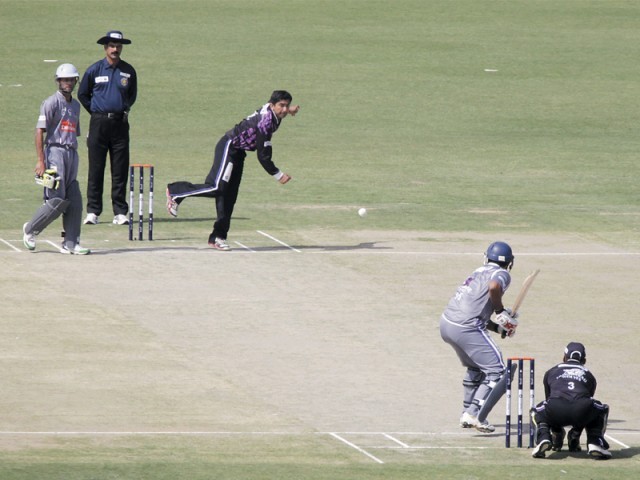 Wolves and Tigers began their campaign with comfortable wins over their opponents yesterday. PHOTO: SHAFIQ MALIK/EXPRESS

Chasing 155, Stags were restricted to 91 for eight in their 20 overs as Shehzad put on the brakes giving away just 20 runs for his wickets while Ehsan Adil, Asad Ali and Imran Khalid took one wicket each.

Hammad Tariq top-scored with 28 in an otherwise poor performance.

Earlier, Wolves posted 154 for four as Asif Ali played a cameo of 34 off 25 with two sixes and three strikes to the fence while Ali Waqas hit 39.

Farrukh Shehzad scored 30 while skipper Misbahul Haq hit a 20-ball 22 with a six and a four as Fahad Masood bagged two wickets.

In the second match of the day, skipper Sohaib Maqsood starred with an all-round performance to steer Multan Tigers to a five-wicket win over Abbottabad Falcons.

Set a target of 142, Tigers had a scare as they went from being 77 for no loss to 120 for five but held on to reach the target.

Opener Zeeshan Ashraf remained unbeaten on 58 off 47 with a six and seven boundaries while his opening partner Maqsood made a 28-ball 45 with eight strikes to the fence.

Meanwhile, Pakistan national team players have complained about the lack of recovery time as they had to turn up for their regional teams to take part in the national Twenty20 tournament.

They were unhappy as they could not get even a complete day’s rest after returning from the tour of South Africa and had to get back in action on the same day of their arrival.

“It isn’t easy to come back home and straight away get into action,” one of the Pakistan players told The Express Tribune. “The tour of South Africa wasn’t easy by any means as it was both mentally and physically challenging for us. Even though we are professionals, we are still human beings who need time to recover and also spend some time with our families.”

He said the Pakistan Cricket Board (PCB) could have looked into the dates of the South Africa tour before announcing the schedule of the T20 event and should have given a gap of at least a couple of days.

There have been calls for making changes in the national squad which has put the careers of several players on the line. The players are keen to make sure that they are not axed by redeeming themselves in this competition.

Pakistan’s ace spinner Ajmal is expected to be out for few weeks because of a hernia problem and will not turn up for Faisalabad Wolves while Shahid Afridi will not be available for Karachi Dolphins initially due to personal commitments. Younus Khan also did not feature in the first match for Abbottabad Falcons.

‘Dates couldn’t be change due to broadcasting issues’

When concerned PCB officials were contacted they said it was not easy to stage the event on any other dates.

“There were issues of broadcasting of this event as Indian Premier League (IPL) is all set to start from April 3 which is why we had to opt for these dates,” a PCB official said.

“We can’t ignore the importance of live telecasting of the fans’ most popular tournament while players love performing in live matches because they get instantly recognised.”