Bench expres­ses dismay over the fact that 40 police­men took refuge in a wareho­use, failed to disper­se the unruly mob.
By Our Correspondent
Published: March 26, 2013
Tweet Email 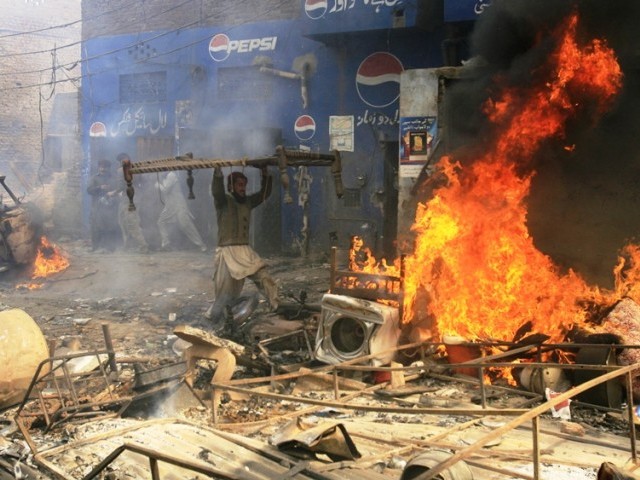 More than 150 houses of Christians living in the Joseph Colony were torched by an angry mob on March 9. PHOTO: REUTERS

The Supreme Court on Monday came down hard on the Badami Bagh police for abandoning their duties and allowing an angry mob to vandalise and torch Christian homes in Joseph Colony earlier this month. Instead of trying to protect the besieged colony’s residents, the court noted with scorn, the policemen took shelter in a nearby warehouse.

“Prima facie their failure to protect the property of Joseph Colony’s inhabitants is sufficient to hold that fundamental rights of the citizens were not protected as enshrined under Articles 9 and 14 of the Constitution,” a three-member bench of the Supreme Court said in its order on Monday.

The bench, headed by Chief Justice Iftikhar Muhammad Chaudhry, expressed dismay over the fact that 40 policemen took refuge in a warehouse and failed to disperse the unruly mob.

“The policemen who were present in Joseph Colony when the incident took place have either been suspended or transferred,” said CCPO Lahore Muhammad Amlesh Khan in his report submitted to the court.

“Your report seems to be wishy-washy, as you have not mentioned what actions would be taken against the police officers responsible for inaction and for ordering the evacuation of the area,” the chief justice observed.

Deferring the hearing till April 1, the court gave the CCPO a week to make further headway in investigations and submit a fresh report.

Separately, the bench directed the establishment division secretary and Punjab chief secretary to move a summary for the appointment of inspector general of police in Punjab.