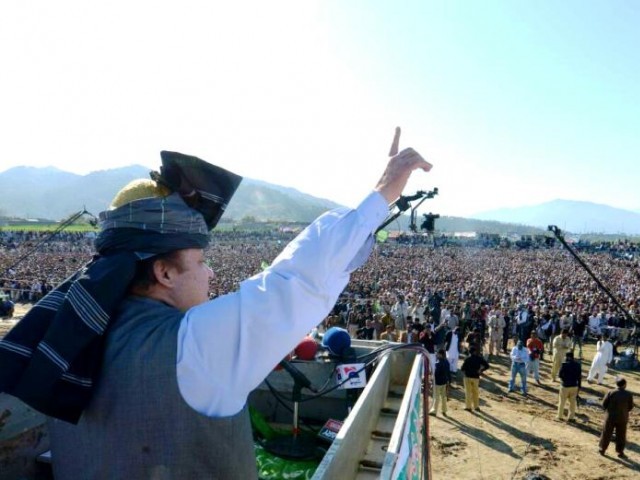 MANSEHRA: The frontrunner in Pakistan’s election race, opposition leader Nawaz Sharif, attracted tens of thousands Monday to a rally at which he promised development and economic success.

Sharif travelled to the northwestern town of Mansehra, a stronghold of his Pakistan Muslim League-N party, where supporters packed a huge stadium.

Two police officials estimated the crowd at up to 30,000, in contrast to the hundreds who greeted former military ruler Pervez Musharraf on his return to Pakistan Sunday after four years in exile to contest the polls.

Opinion polls are notoriously unreliable in Pakistan, but indicators suggest Sharif is likely to emerge the biggest winner from the general election on May 11, which will mark the country’s first democratic transition of power.

The PML-N’s election symbol is a tiger and the rally featured a live tiger in a cage.

Many voters are disillusioned with the outgoing Pakistan People’s Party (PPP) government, saddled with allegations of corruption and mismanagement. Security and the economy have worsened over the last five years.

Pakistan became a nuclear power in May 1998 during Sharif’s second term as prime minister. He was ousted by Musharraf the following year.

“Last time we carried out nuclear explosions. Now we will carry out economic explosions,” Sharif told the crowd.

Wearing a traditional dark grey turban offered to him by local leaders, he urged them to vote for “Pakistan”.

Militant attacks and record levels of violence against the Shia Muslim minority have raised fears about security for the polls in the nation of 180 million.

Sharif ordered a bullet-proof screen around his podium to be removed, a move greeted with loud applause.

But security was extremely tight with police commandos patrolling with AK-47s and a buffer zone ringed with barbed wire around the stage.

As prime minister, Sharif earned praise for economic reforms and for building a motorway from the northwestern city of Peshawar to the northeastern city of Lahore.

He promised that if elected a third time, he would build a motorway from Lahore to Karachi, Pakistan’s business capital on the Arabian Sea.

“I am not fond of power, I only want to see my country progressing and my people prosper,” he told the crowd.

He returned to power in 1997 after an election but was ousted in the 1999 coup by Musharraf and was sent into exile in Saudi Arabia in 2000.

He returned in November 2007 just before the February 2008 general election, won by the PPP on a wave of support following the assassination of its leader Benazir Bhutto in December 2007.