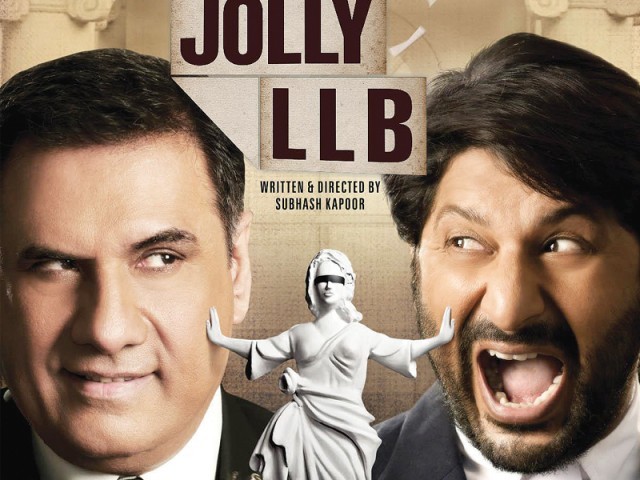 The film emphasises the dark side of the Indian judicial system. DESIGN: S ASIF ALI

With a title like Jolly LLB and a cast boasting stellar actors like Arshad Warsi and Boman Irani, it is natural for one to expect this Subhash Kapoor film to be a spin-off of the fantastic Munna Bhai MBBS. While the film does have its share of hilarious one-liners, it is unlike Munna Bhai in the sense that it does not revolve around one man’s journey to become a lawyer; instead, it brings to light the dark side of the Indian judicial system with some highly dramatic, serious scenes.

Arshad Warsi plays the role of Jagdish Tyagi (Jolly). Jolly leaves Meerut to look for better opportunities in Delhi, in the hope of becoming one of the most influential litigators in the country. A series of interesting events leave him fighting for justice for the victims of a drunk driving episode. As Rajpal, Boman Irani is the big-shot litigator for the family involved in this high profile case.

For those who have seen Kapoor’s Phans Gaye Rae Obama (PGRO), this film will not be impressive, as the director had set high expectations with his previous venture. The strength of a film like PGRO lies in a strong and carefully constructed screenplay that has no room for irrelevant information about the story and relies completely on a symphonic flow of an incredible script.

Jolly LLB is quite the opposite, as it relies totally on talented actors to infuse new energy in an apparently flat and interactive script. This is primarily the reason why this film is a one-time watch; unlike many court room dramas, its story is headed in a different direction. The humour comes from events which have nothing to do with the plot and your anticipation for something better is wasted.

A film like OMG Oh My God is an example of court room drama that not only drives home a serious point, but manages to do so as a coherent whole. It is something you’d want to watch over and over, not because it touches on controversial issues but because it is engaging. Unfortunately, Jolly LLB does have its strong moments, but the film as a whole does not leave you satisfied.

Despite that, Kapoor still gets our vote for extraordinary direction; all the performances are awe-inspiring. True to his skill, Irani takes his game a few notches higher with this one and delivers his character of a greedy man under the shelter of a black coat eloquently. Warsi sounds like Circuit from Munna Bhai at places, but that adds extra depth to this lawyer-turned-reformist who shares some really powerful scenes with Irani. Amrita Rao, who plays Jolly’s love interest, displays a massive improvement in her acting skills. Veteran Saurabh Shukla, popularly known as Kallu Mama, brings a new flavour to every scene, making sure that his experiences shows in every line he delivers.