With Chambaili, a colony of workers gets a facelift

With Chambaili, a colony of workers gets a facelift

The spirit­s of a small worker­s colony are lifted with the shooti­ng of the film.
By Sher Khan
Published: March 17, 2013
Tweet Email 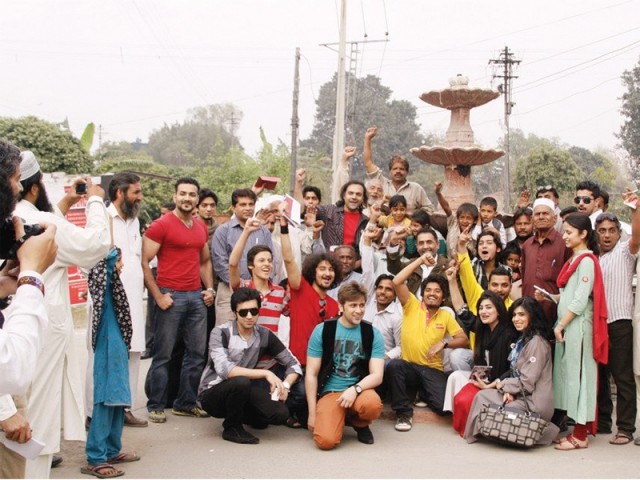 The experience was embracing as local residents in this colony, helped with security and other roles in the film. PHOTO: PUBLICITY

Who would have thought that the simple lives of workers in a colony owned by Pakistan Railways would change with the shooting of one film? When Chambaili was filmed in October last year, major scenes were shot and developed in the Gari Shahu area, where a tiny old structure has now been christened Chambaili Chowk.

Earlier this week, director Shahzad Nawaz returned to the location to inaugurate Chambaili Chowk as a token to the residents who played a role in the film’s shooting.

“This area was not worth living in,” says Shakeel Ahmed, a resident whose excitement about the film is bubbling. “They cleaned up the place and infused energy and excitement that we have never seen before. They took the whole neighbourhood on board with this project.”

The crew had spent nearly 10 to 12 days shooting major portions of the film. Residents of the colony helped with security and other minor roles in the film, making it a learning experience for everyone involved. Like other residents, Ahmed is pleased about being connected to the project.

“Many of the actors were new, but there were a lot of scenes shot here,” says Nasir Raza, an elderly gentleman from the area. “I remember this one scene in which everyone was gathered together. The police was cracking down on [people] and there was a baton charge— it was quite entertaining for a lot of us,” he adds.

With the film in its promotional phase after the recently released OST soundtrack in Karachi last week, the inauguration of the chowk is Nawaz’s attempt to go back to where the film started.“The people who lived here had become a part of the making of this film, so this is our way of thanking the people,” says Nawaz.

Nawaz says that the film is a patriotic one and will appeal to everyone who feels anything for the country. “The concept of loving Pakistan has declined,” says Nawaz. “The land is missing its patriots and the concept of being nationalist has become outdated — this film will really help that.”

Despite its reputation, the Pakistan Railways has done a service to the country by allowing the film to be shot on its property, Nawaz explained. Such initiatives help promote positive culture and arts. Nawaz also said that the film’s total crew had almost 8,000 people and hoped that the film would turn around the fortunes for the film industry.

He explained that the film would be released in 25 multiplexes and cineplexes in the county, in what he calls the A-circuit. He says that the environment is set for a film that will show a “positive image” of the country, while also being entertaining.

The film stars Mehreen Syed, Umair Rana, Salmaan Peerzada, Shafqat Cheema and an array of other actors. It is expected to release sometime in April but a confirmed date will be announced at the end of the month.

CEO of Meta-tags Shahzad Saheb, explained that accessories for the film would be available online. He said that since Chambaili is the national flower of Pakistan, merchandising will let fans see it as a symbol of nationalism.

“Making this flower into a symbol is where I come in,” says Saheb. “There is a sort of suspense of what the movie is about. Merchandising will be very important after the release, as it helps in making it into a symbol that is long-lasting and not forgotten.”

The reason fruits and vegetables make you beautiful