Growin­g market for yarn, raw cotton and cotton cloth could be a lifeli­ne for local indust­ry.
By Khurram Baig
Published: March 18, 2013
Tweet Email 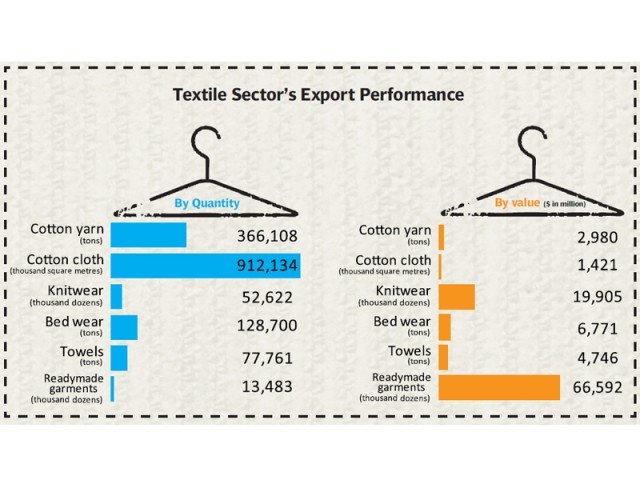 Growing market for yarn, raw cotton and cotton cloth could be a lifeline for local industry.

The textile sector enjoys a pivotal position in the exports of Pakistan. The contribution of this industry to total gross domestic product (GDP) is 8.5%. It provides employment to about 15 million people, 30% of the country’s workforce of about 49 million. The annual volume of total world textile trade is $18 trillion which is growing at 2.5%. But Pakistan’s share is less than one per cent.

The past few years, however, have probably been the worst ever for the textile sector in Pakistan. Some of it is obviously not their fault, but some of it is. For example the power crisis, the security situation and the lack of access to global markets has certainly had an effect on the ability of the industry to compete.

However, a lot of it is definitely the fault of the textile industry which for the most part has failed to use the decades of protectionism to its advantage and invest in value addition, in innovation and in improving technology to ensure that they move higher in the value-added chain.

For example our total exports of ready-made garments, which sit at the top of the value-added chain is just about a billion dollars or less than 10% of our total textile exports.

The country has almost zero share of branded and high-value fashion and sportswear textile in global markets, despite huge public demand for such products in Europe and the US, which is being fulfilled by our South Asian competitors, including India, China and Bangladesh. Pakistan’s total exports in this sector are barely $50 million.

Pakistan gets about $10.2 billion of its $12.5 billion textile export revenue from 20 countries. However, it accounts for merely 5.7% of the total textile imports of these 20 countries.

China is the second largest buyer of Pakistani textiles, importing $1.527 billion of textiles last fiscal. Unlike US where mostly value added textiles are imported, China buys only cotton yarn and cotton fabric from Pakistan.

And the Chinese appetite for yarn is about to go up, exponentially. China’s aggressive cotton stockpiling policy has pushed up domestic prices, forcing the world’s largest textile industry to boost imports of yarn by as much as a third in 2013, while production moves to southeast Asia, drawn by lower costs there.

Beijing’s stockpiling moves, launched in 2011 and designed to support farmers, have held domestic cotton prices about 40% above world levels as the country has built a reserve that traders estimate to stand at about 10 million tons.

Chinese textile mills are turning to neighbours such as India and Pakistan to buy cotton yarn.

China’s cotton yarn imports from September to November 2012 rose 56% year-on-year to 409,877 tons. Imports over the year to August 2012 were 1.3m tons for an annual increase of 43%, according to official customs data published by industry website cncotton.com. But traders say the actual figure could be more than twice that, if the official data is combined with cargoes imported through border trade with Vietnam.

China is expected to issue extra cotton import quotas to textile mills in April after purchases for the government’s stockpile cut domestic supplies.

The market expects Beijing to allocate as much as 800,000 tons of import quotas, most of which will be issued to textile mills that export their products. That will add to 894,000 tons of low-tariff quotas issued earlier this year.

So what does that leave Pakistan with? Frankly speaking, it leaves us with lots and lots of untapped potential. Pakistan already exports about 70% of its total yarn exports to China and Hong Kong. So if demand jumps 50% or more, the impact on Pakistan yarn exports can be huge, which coupled with falling local demand could be a lifeline for a large sector of our industry.

Pakistani textile products accounted for a meagre 3.3% or $1.07b of total UK’s textile imports in previous fiscal

Pakistan’s textile exports accounted for 12.4% or $4.61b of total Chinese textile imports in fiscal 2012

Pakistani textile products accounted for a paltry 1.6% or $0.88b of total German textile imports in the fiscal year 2011-12

Pakistani textile products accounted for 0.7% or $0.888b of total Indian textile imports in fiscal 2012