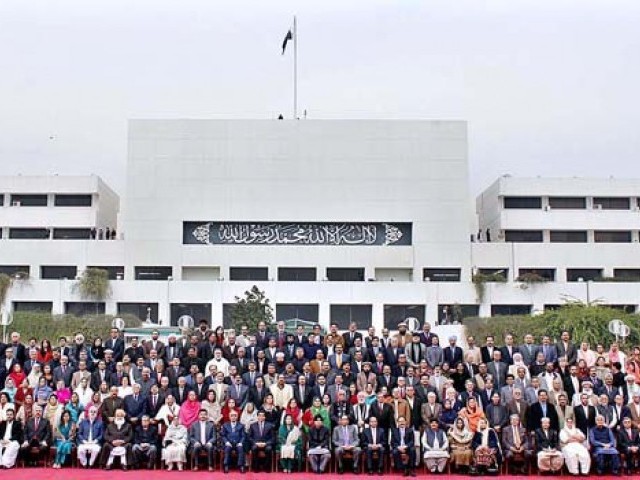 Group photo of the National Assembly of Pakistan upon completion of their five year term. PHOTO: APP/FILE

ISLAMABAD: As Premier Raja Pervez Ashraf and chief ministers of four provinces agreed to hold elections of the national and provincial assemblies on the same day, the Ministry of Parliamentary Affairs issued the notification to dissolve the 13th National Assembly on Saturday night, officials said.

It is the first time in Pakistan’s 66 years history that the National Assembly has completed its five-year tenure. The five years from 2008 to 2013 witnessed the repeated confrontation between the treasury and ruling benches but ultimately, the democracy succeeded.

The dissolution of the federal legislature was pronounced under Articles 52 which reads: “The National Assembly shall, unless sooner dissolved, continue for a term of five years from the day of its first meeting and shall stand dissolved at the expiration of its term.”

As the 342-member National Assembly stood dissolved on March 16 (12 am), federal cabinet ministers would also lose their ministerial portfolios. The Cabinet Division issued a separate notification in this regard.

Pakistan has been witnessing dissolution of several governments which could not complete their terms on various pretexts as the president in the past had the powers to dissolve the National Assembly.

However, the outgoing democratic government convinced President Asif Ali Zardari to transfer the powers to Prime Minister through an amendment in the constitution.

According to the constitution, federal elections would have to be held within 90 days of the dissolution of the National Assembly.

“Because of our policies, today Pakistani exports stand at $25billion,” he said, further adding that the $13bilion worth of remittances that the country received from overseas last year was a proof of the confidence that overseas Pakistanis had in the country’s economy.

Talking about Balochistan, PM Ashraf said that President Zardari had personally taken interest in the issues of the province and had invited Baloch leaders for talks as he and the government believed in implementing a policy based on reconciliation.

The prime minister further said that his government worked to improve relations with neighbouring India and Afghanistan.

“We have extended hands of friendship to India and Afghanistan, so that regional peace could be maintained,” he said.

In defence of dual nationals