Land of Joseph Colony belong­ed to the Lahore city distri­ct govern­ment had not been allott­ed to anyone, says AG Punjab.
By Mudassir Raja
Published: March 12, 2013
Tweet Email 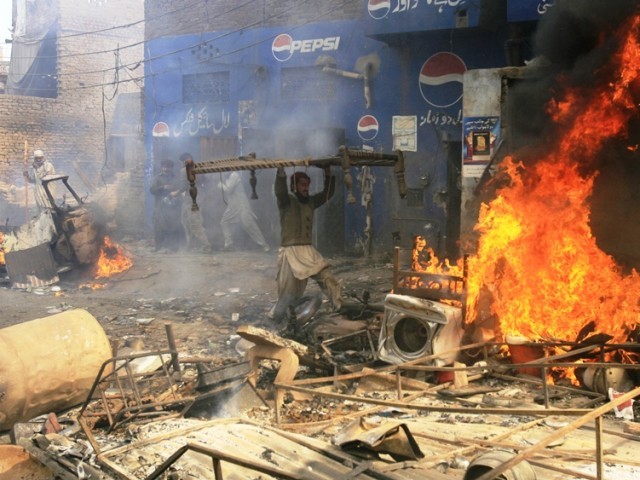 Justice Saeed pointed out that the police’s inaction in incidents of attacks on minorities seems to have become a pattern. PHOTO: REUTERS

The Supreme Court suspects that a land occupation issue could have set off Saturday’s arson attack on a Christian neighbourhood in Lahore.

More than 200 houses were burnt down in Joseph Colony by a mob which was incensed by alleged derogatory remarks against the Holy Prophet (pbuh) made by a Christian sanitary worker.

The Supreme Court took suo motu notice of the incident on Sunday. During the first hearing on Monday, Chief Justice Iftikhar Muhammad Chaudhry, while quoting media reports, said that the arson attack did not seem to have stemmed from a blasphemy case. A land occupation issue might have been the trigger, he added.

The three-judge bench also censured the Punjab police for its failure to protect Joseph Colony and warned of action against the top police officials of the province, including the police chief.

“We may pass an appropriate order against the inspector general of police (IGP) Punjab, capital city police officer and superintendent of police after observing their progress in the case as, prima facie, they failed to stop the mob from setting over 200 houses ablaze,” said Justice Chaudhry.

Justice Sheikh Azmat Saeed pointed out that the police’s inaction in incidents of attacks on minorities seems to have become a pattern. “It seems the state in Lahore is in retreat. Will the authorities retreat till they are pushed as far as Raiwind?”

Punjab Advocate General Ashtar Ausaf and Acting IGP Khan Baig could not satisfy the bench regarding who ordered the evacuation of the Christian families and what exactly was the motive behind it.

“Residents left their houses on their own after the hysteria spread. As the news of the alleged blasphemy broke on Thursday and Friday, the Christians started leaving their homes,” said Baig. He, however, added that the local police did help the residents evacuate in a bid to save lives.

“Why did the police fail to safeguard their houses and property after their evacuation? Why were the instigators not pinpointed and the mob not stopped from setting the houses on fire even after a blasphemy case was registered and the accused was arrested,” Justice Chaudhry asked. IGP Baig could not come up with a response.  Inaction and delayed response on part of the police has become a pattern, the chief justice said and added that the Joseph Colony properties could have been saved.

The advocate general said the land of Joseph Colony, measuring 20 kanals, belonged to the Lahore city district government had not been allotted to anyone.

Justice Chaudhry also enquired whether the Punjab government had publicised the judicial commission’s report on the Gojra riots. “We haven’t,” replied the advocate general.

In 2009, the Christian community in Gojra was attacked by a mob angered by alleged blasphemy. Eight community members were killed in the attacks.

The chief justice directed the report be made public.

The hearing was adjourned till March 13.

Meanwhile, an anti-terrorism court awarded four-day physical remand for 14 accused allegedly involved in the arson incident as well as in injuring around 25 police officials.

(With additional reporting by our correspondent in Lahore)

Awan under consideration for IT secretary slot