Looking back: Not a single person convicted for Gojra riots

Looking back: Not a single person convicted for Gojra riots 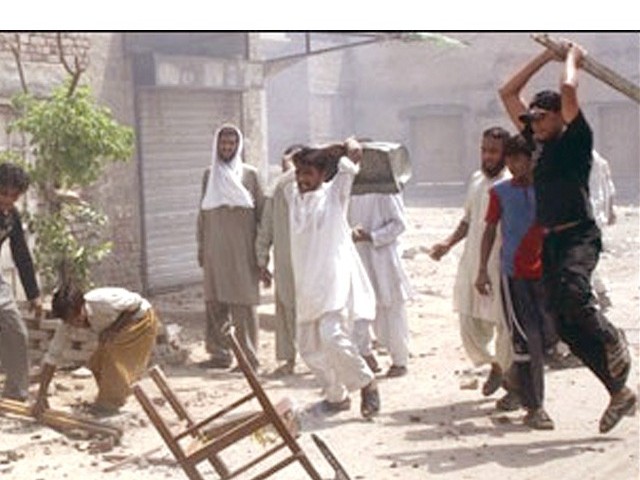 Rioters in Gojra ran amok over rumours of desecration of the Holy Quran. PHOTO: EXPRESS/FILE

Of the 1,000 accused in the 2009 horrific Gojra riots, where eight Christians were burnt alive and 60 houses torched, not even one has been convicted thus far, The Express Tribune has learned.

On July 31 2009, Christian Colony in Gojra, Toba Tek Singh, was set ablaze by a Muslim mob. During the subsequent inquiry, a total of 185 witnesses submitted written statements, while five went abroad.

The police had registered two cases. In the first case, 70 people were nominated by the complainant, of which 68 were granted bail-before-arrest by the court. The remaining two – Atif alias Neeru and Ghulam Abbas – were detained. Atif and Abbas were on surety bonds worth Rs100,000 each.

One case was registered in August 2009 at the Gojra police station by Almas Hameed Masih, a resident of the Christian Colony. Seventy people were nominated in the FIR while 800 were unidentified. Almas Masih’s father, wife, sister, brother, sister-in-law and two children were burnt alive in their house where Almas had locked them for protection and he himself was firing to defend himself from the rooftop of the house. Almas was injured while his relatives were burnt alive when the mob set his house on fire.

All the accused were released on bail after the petitioners and witnesses were pressured to withdraw their statements and file affidavits in favour of the accused. As a result, the complainants stated that the accused were named by mistake and had no role in the incident.

On condition of anonymity, a Christian resident of Gojra told The Express Tribune that the relatives of a Muslim who was arrested had pressured them to withdraw their stances.

Despite this, the case is still pending before a special anti-terrorism court in Faisalabad, which in 2012 had deferred the hearing for non-appearance of the complainants before the court to record their statements.

In the second FIR, 21 accused were nominated and hundreds were unidentified.

As both complainants were not in Pakistan, the court stated that it would take up the matter upon their return to the country. The court issued this order by accepting two applications that were moved before it, from both the accused and prosecutors, suggesting the issuance of a stay order on the case.