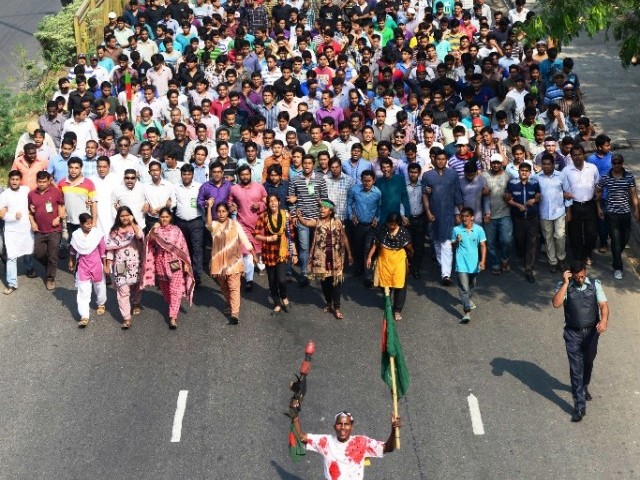 Bangladesh Awami League activists march against a strike called by the Bangladesh Nationalist Party (BNP) in Dhaka on March 7, 2013

DHAKA: A young ruling party activist was beaten to death during clashes in northwestern Bangladesh Thursday as a nationwide strike called by the opposition shut schools and businesses across the country.

The opposition Bangladesh Nationalist Party enforced the strike to protest at police firing on a rally on Wednesday, when at least two senior party officials were hit by rubber bullets in front of the BNP headquarters.

It was the 12th such strike called this year by the BNP and its ally the Jamaat-e-Islami party, in protest against a controversial tribunal trying their leaders for crimes during the 1971 war which won independence from Pakistan.

The stoppages hit businesses, deliveries of exports and imports to and from seaports and the transport of farm products from rural areas, among other areas.

In the most recent clashes, violence broke out between rival political activists from the BNP, Jamaat and the ruling Awami League in the town of Bholarhat on Thursday, local police chief Shahid Suhrawardy told AFP.

“A 25-year-old young man who is a member of Awami League’s youth wing died on the spot after he was beaten by BNP and Jamaat supporters,” Suhrawardy said.

Several people were injured in the clashes, he added.

The killing raised the death toll to 84 since the first war crimes verdict was announced on January 21. Sixty-eight of the total have died in the past week, since Jamaat’s vice-president Delwar Hossain Sayedee was sentenced on February 28 to hang.

Security was tight in the capital Dhaka with about 10,000 policemen on patrol. Schools and businesses were closed, while roads and inter-city motorways were largely empty.

Police “picked up” four female lawmakers from the BNP outside its headquarters in central Dhaka, city police spokesman Masudur Rahman told AFP. “I can’t confirm whether they were arrested,” he said.

Three convictions by the state-appointed tribunal have triggered the worst violence in the impoverished country since independence, hitting economic growth and raising concern over political stability.

The war crimes proceedings against a dozen Jamaat and BNP leaders have opened old wounds and divided the nation, with the opposition accusing the government of staging a witch-hunt.

The government, which says the 1971 war claimed three million lives, rejects the claims and accuses Jamaat leaders of being part of pro-Pakistani militias blamed for much of the carnage during the war.

Pakistan ranks 122 out of 140 countries in Travel, Tourism Competitiveness report