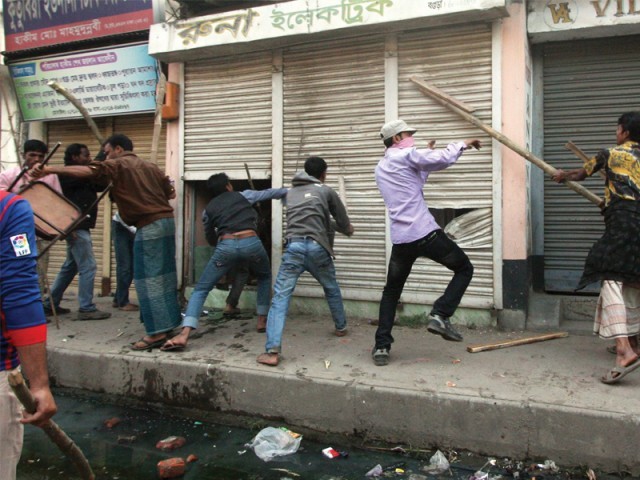 DHAKA: Bangladesh deployed troops in part of the country after fresh clashes erupted on Sunday, taking the death toll to 76 in weeks of violence over the conviction of Jamaat-e-Islami leaders for war crimes.

Twenty people were killed in the latest bout of violence as the country’s largest religious party declared a nationwide strike to denounce the trials.

In the northern district of Bogra more than 10,000 Jamaat supporters armed with sticks and home-made bombs attacked 12 police stations, torching four of them and two government offices, police said.

“They came from the villages and attacked the stations at dawn. Nine people were killed in Bogra district, including four who were killed in Shahjahanpur (town),” police Inspector Shamsul Haq told AFP.

Troops have been deployed in Shahjahanpur to strengthen security, he said. Video footage also showed troops in the area.

“The forces fired after they were besieged by the protesters for about two hours. They were armed with sticks, machetes and home-made sharp weapons,” he said, adding at least 70 people were injured, many by bullets.

A policeman was beaten to death by protesters in a western district.

The death toll in the clashes over the war crimes verdicts has risen to 76 since the first ruling was announced on January 21, police said, including 60 killed in the four days since Jamaat’s vice president was sentenced to death.

Delwar Hossain Sayedee was on Thursday found guilty of murder, religious persecution and rape during the 1971 war. The sentence triggered violent clashes across the country between rampaging Jamaat supporters and police.