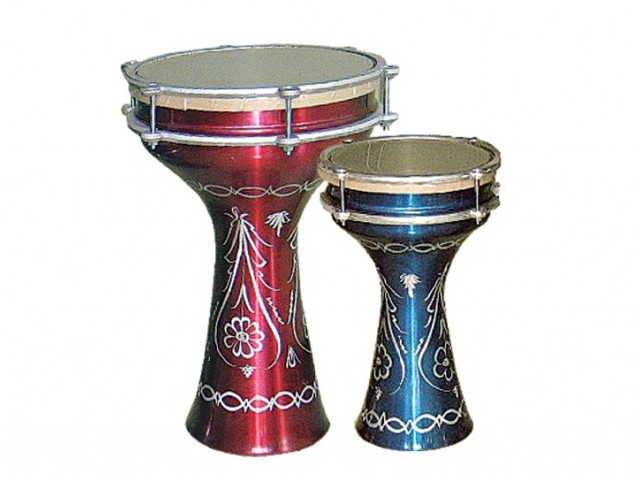 Darbuka, also known as doumbek (or tumbak), or derbeki, is a Middle Eastern percussion instrument. The goblet-shaped single headed hand-drum is an ancient drum. It was originally played in Egypt, Armenia and Turkey.

The darbuka is considered to be the leader of percussion instruments in the Middle East. The origin of darbuka has its roots in the Oriental music, where distinctive rhythms are quite common. However, in the latter years, Darbuka made its way into Western music.

Authentic darbukas are home made and are made of clay or wood with goat skin stretched over the top using rope, leather thongs or nails.

Contemporary versions of darbuka may also use aluminum or copper with synthetic fibres for the drumming surface. The fact that the drum is single-headed distinguishes it from other musical instruments of the family, such as the tabla, dhol and pakhawaj. Since the instrument has a long history of being used for belly-dancing music in the Middle East, it is also referred to as the belly dance drum.

The first known western classical composition to feature a goblet drum is the opera Les Troyens by the French composer Hector Berlioz, which calls for a tarbuka in the Dance of the Nubian Slaves in Act IV. While the first compositions for goblet drum and orchestra were composed by Halim El-Dabh in the 1950s. His Fantasia-Tahmeel for goblet drum and strings was premiered in New York City in 1958, with a string orchestra conducted by Leopold Stokowski.

“Darbuka is well recognised in parts of the world other than Pakistan, as it is not only North Indian instrument. We often find similar shaped folk instruments in our region but these are not exactly darbuka,” says Zeeshan Ali, a final year Music student at the National College of Arts (NCA), Lahore and a player of darbuka. He says that although there are Persian influences in Pakistani music and culture but there isn’t much influence of darbuka in our musical system.

Every musical instrument has its own language and every percussion instrument has its own specific bol. This language consists of different strokes. Some of the basic strokes of the darbuka are doum, ta ka and pa. Each stroke has its own set of technicalities which a musician must pay attention to create a certain rhythm. Ali describes the way these strokes vary, “To produce doum, the bass sound, you hit the drum with your flat right hand and let it bounce off immediately. The fingers are together and straight. For producing ta ka, the rim stroke sound, you put together the middle and ring finger of the right hand and hit the very edge of the skin. The same is done using the same fingers of your left hand. For producing the pa sound, or the slap sound on the darbuka, the finger must be left loose than for the bass and you keep them on the skin. It is similar to a slap on a conga.”

Abdul Aziz Kazi, drummer for Pakistani underground rock band Spoonful, primarily plays the drums but also plays the darbuka occasionally. “I got a darbuka by chance. A friend bought it for me from Dubai. It was the first time I had seen the instrument. It seemed like just another instrument at first. However, the more I toyed around with it, the more possibilities I discovered. Playing acoustic beats with it is much easier. A lot of times it saves the hassle of carrying the entire drum set. I can play eastern as well as western beats on the darbuka.”

Ali, who has been in the field of music for seven years now and performs classical music live in concert, believes that percussion music is gaining popularity amongst young Pakistanis and there is a growing awareness about different kinds of percussive instruments. He cites the example of Overload, a Lahore-based band, who use the dhol and tumbak in their music.

As a variety of darbuka are available, it may not be easy to choose one out of the many to play. However, those who know about the instrument or are interested in playing it would know which one is best for them. Some of the common types include the Egyptian darbuka, the Turkish darbuka, the Oriental darbuka, and the Arabian darbuka.

One needs to be sure of the kind of darbuka they want. Picking the correct one is as important as playing it. Each one has unique notes and sound. The sound of the Turkish Darbuka will be significantly different from that of an Arabian one. Therefore, before actually buying it, one should do their homework thoroughly and be sure that it suits their requirement and budget.