Exclusive interview: A peek into the Afghan Taliban mind

Exclusive interview: A peek into the Afghan Taliban mind

Akbar Agha says Taliba­n will only talk to US; asks Islama­bad to stay away from Afghan peace proces­s.
By Munizae Jahangir
Published: February 28, 2013
Tweet Email 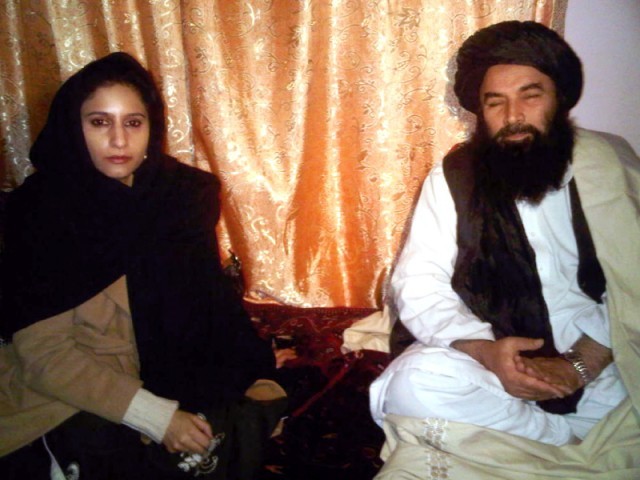 Nine years ago he was sentenced to 16 years in jail for kidnapping three United Nations workers in Afghanistan. However, he was pardoned by President Hamid Karzai in 2009 and subsequently released. Today, he lives in a mansion in an upscale neighbourhood of the Afghan capital. Meet Syed Muhammad Akbar Agha, a former leader of the ultraorthodox Taliban militia.

Born in the birthplace of the Taliban movement, Akbar Agha is a cousin of Mullah Muhammad Syed Tayyab Agha, former chief of staff of elusive Taliban supremo Mullah Omar and currently the chief peace negotiator of the militia. In 2004, Akbar Agha formed the breakaway Taliban faction of Jaishul Muslemeen which carried out frequent attacks on Nato supplies.

He believes the US military wants talks with their boots on the Taliban’s neck. “Peace negotiations can begin only if all international troops pull out of Afghanistan,” he told ExpressNews anchor Munizae Jahangir in an exclusive interview. He added that enforcement of the Taliban’s hard-line version of Islamic shariah was “not negotiable”.  Akbar Agha frequently churns out statements for the media on behalf of the Taliban militia.

Recently, Taliban negotiators met with Afghan interlocutors in the Qatari capital of Doha as part of a fledgling peace and reconciliation process sanctioned by President Karzai — with US blessings, needless to say. Officially, the militia denies any contact with emissaries of President Karzai who, they say, is a “US puppet”.

However, the Afghan government spokesperson, Aimal Faizi, has claimed that Taliban representatives are willing to hold talks with the Karzai administration as they travelled to Paris last December on official Afghan passports to take part in a conference organised by a French think-tank.

Agha Akbar rejects the claims. He said the Taliban representatives travelled using the same passports they used before the overthrow of their regime in late 2001. He added that the Taliban were reluctant to use Pakistani passports because it would reinforce the general impression in Afghanistan that the militia was under Pakistan’s tutelage.

Akbar Agha echoed an oft-repeated statement by Taliban spokesperson Zabihullah Mujahid that they would only talk to the United States. “We have never invited Pakistan or Afghanistan for talks. Afghan Taliban are a reality and we do not feel a need to sit across the table with Pakistan. We will hold peace talks with the US. The Afghan people or government can be taken on board at a later stage,” he added.

Influential Pakistan politico-religious leader Maulana Fazlur Rehman travelled to the Qatari capital earlier this month to facilitate talks with the Taliban, albeit the two sides officially denied the Doha rendezvous. Akbar Agha also had a word of advice for Islamabad. “Pakistan should keep itself away from it [peace talks] because the Taliban are blamed for having Pakistan’s patronage.”

He made it clear that the Taliban would only negotiate with the US after it built trust by releasing their prisoners from the Guantanamo Bay detention centre and giving guarantees that no criminal cases would be pursued against them.

Of late, Pakistan released several mid-ranking Taliban cadres at the request of the Afghan High Peace Council as part of its efforts to facilitate the nascent peace process. However, Akbar Agha claimed that as an Islamic state, it was Pakistan’s obligation to free the Taliban prisoners and that it was an un-Islamic move on Islamabad’s part to arrest those “waging a jihad and hand them over to the United States for money”.

He accused Pakistan of deceiving the Taliban and said that it should release all Taliban prisoners unconditionally, consider Afghanistan as a brotherly country and make sincere efforts to solve its problems.

Akbar Agha also indirectly condoned the Tehreek-e-Taliban Pakistan (TTP)’s bloody insurgency. Pakistani Taliban only retaliate against their government in support of their Afghan namesakes, he said, adding that the Afghan Taliban would always support them. While he condoned TTP attacks against Pakistani government, he condemned those targeting innocent civilians.

He said the Afghan Taliban resented that the Pakistani government arrested TTP militants and forced them to agree on certain points at the behest of the Americans. In a quick rejoinder, Akbar Agha, however added that the Afghan Taliban do not blame the people of Pakistan for their government’s policies. (The interview will be aired on ExpressNews tomorrow at 4pm)