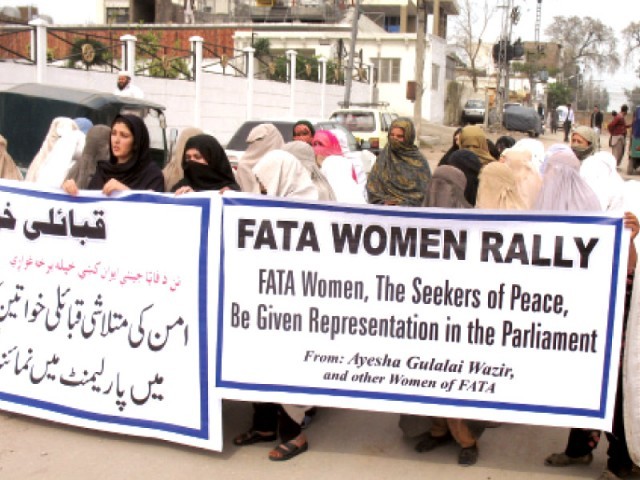 Political activists and civil society members staged a protest, outside the Peshawar Press Club on Monday, demanding the representation of women from Federally Administered Tribal Areas (Fata) in the Parliament.

They were holding banners and placards inscribed with slogans for equal rights for women of Fata. Pigeons were also set free to mark women’s struggle for freedom from dependence on others.

The protesters maintained that they have full support of the men in Fata and the social and cultural conditions of the tribal areas do not prevent them from contesting election and representing the women in Parliament House.

Led by Ayesha Gulalai Wazir, a member of Pakistan Tehrik-e-Insaf (PTI), they said that the protest marked the beginning of their movement and they would continue until the women in Fata are not provided decision-making powers among other opportunities at par with the women in other parts of the country.

They further said that the women of tribal areas have rendered sacrifices for the country and thus, should be provided representation in the Parliament. “The women of Fata are living in the stone-age era. They have lost their loved ones and want peace but even then they do not have any role in decision-making,” said Wazir, adding “unless this half of population is not provided their rights, peace cannot be restored in Fata.”

When asked whether the social and cultural conditions of Fata allow women to participate in election and lead the tribal society, she said, “The world has a wrong impression of tribal people, the social and cultural environment is not the hurdle, it is the lack of education and the non-availability of basic rights due which they unable to raise their voice and participate in the democratic process.”

Meanwhile, the women also complained about their living conditions. Mehr Khattak, a protester from Frontier Region Kohat, said, “We should be given opportunities in education and health sector, we have been kept in darkness for years.” Khattak stressed upon the government to include Fata’s women into mainstream politics.

Maryam Bibi, founder and chief executive of Khwendo Kor  (sisters’ home), said that the women of Fata are raising voice for their democratic right and should be provide opportunity to represent Fata in Parliament