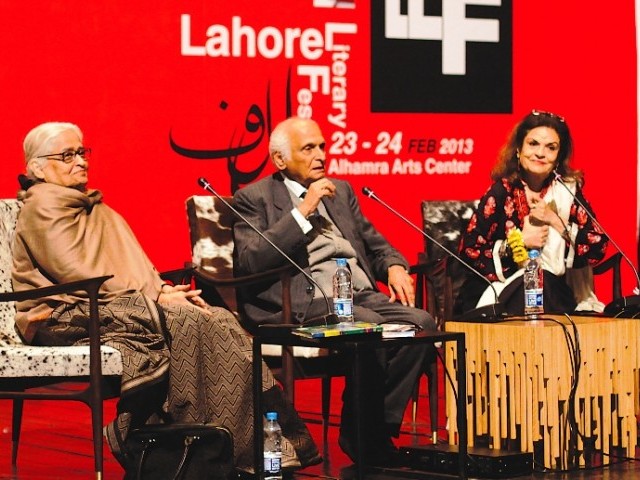 LAHORE: When she began her career as a poet, people would wonder whose poetry Zehra Nigah recited. On Saturday there was no doubt about it as the audience gave her a standing ovation at the end of her discussion with writer Intezar Hussain and the panel moderator Samina Rahman.

The discussion reflected the writers’ camaraderie and respect for each other, as their interaction seemed more personal than professional. When Nigah was going to recite a poem and asked Rehman to translate it in English, Hussain requested a personal favourite. He asked Nigah to recite Gul Zameena, a poem about a girl whose school had been destroyed by the Taliban.

Hussain began the session with praise for Nigah. “She was the poet who would always steal the show at a mushaira,” he said. He asked her how she had managed to maintain the ‘freshness’ of her work even though she had ‘disappeared’ for many years and had shifted from writing ghazals to poems.

Hussain said during Nigah’s early years as a poet, people would think she was reciting poems penned by her grandfather. Nigah reminisced about the first time she was invited to Lahore and her parents were reluctant to allow her to go because ‘poets were not considered respectable’. She said they demanded that she attend the mushaira in a burqa eventually agreeing to let her wear a white shalwar-kamees and dupatta.

She spoke about the advice poet Jigar had given her when she started out. He told her not to repeat her verses if the audience asked her for an encore. “He said do it only if you feel like it,” said Nigah. She spoke about an incident when all male poets except Habib Jalib walked out at a mushaira when the moderator introduced her as poet, “Jin k aagay baray baray shairon kay chiragh gul ho gaye (in whose presence many big time poets appear dim)”. She said Jalib told her to go ahead and when the poets saw the mushaira had begun despite the walk out, they all came back.

Hussain lauded Nigah’s work for its ‘quiet protest’. “I believe this kind of poetry can bring about a revolution, not the sort that screams ‘Inquilab’,” he said.

He said people had asked him why no one was writing about the Taliban bombing schools and about terrorism. “I ask them if they have read Zehra’s work and none of them have,” he said, “We have this habit of dismissing what our women write.”

The panel discussed whether translation could capture the essence of poetry. Hussain said he believed prose could be translated quite faithfully but not poetry. Poetry is whatever is left out of translation, he said.

Her recitation of the verse Barson huay tum kaheen nahin ho, aaj aisa laga yaheen kaheen ho (You haven’t been around for years; but today it was as if you were here), received a standing ovation.