The Hazara demand is unders­tandab­le but a danger­ous one given the nature of their attack­ers.
By Mohammad Ali Talpur
Published: February 22, 2013
Tweet Email 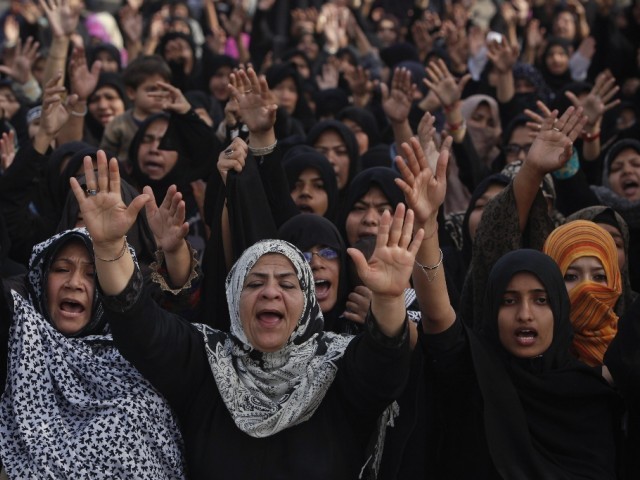 The soul-gutting Alamdar Road carnage last month forced the Hazaras to protest by refusing to bury their dead until demands were met. The apathetic and inept government woke from its slumber and tried to make amends by imposing Governor’s Rule and handing Quetta over to the Frontier Corps (FC) with the promise that action would be taken against the culprits.

However, this start was an inauspicious one as the FC, instead of acting against those responsible for the sectarian terror found it opportune to unleash its fury against the Baloch nationalists in Mastung and elsewhere simply because the state considers the Baloch nationalists, who now unequivocally demand freedom, an existentialist threat. The scourge of fundamentalism and sectarianism which is undermining regional and world peace, it appears, is not considered an urgent enough threat.

The FC, obsessed with Baloch nationalists, had no time or the will to tackle organisations such as the Lashkar-e-Jhangvi and thus it was only a matter of time that a tragedy of Alamdar Road proportions was bound to happen. It materialised in the form of the Kirani Road bloodshed a few days back. Dejected by the futility of their protest, the Hazaras have this time demanded the army take over Quetta. This demand naturally rankled the Baloch, who have long seen the army as instrumental in their oppression.

Aggrieved parties are extremely sensitive and one has to be careful about commenting on their sentiments. Devastated and hurt beyond words, the Hazaras are naturally seeking an end to this ethno-sectarian cleansing in which they are easy targets because of genetics and geography – they have distinguishable features and inhabit specific neighbourhoods. It is understandable that they are grasping at all possible straws to put an end to this ghastly nightmare which has become increasingly horrific since the first incident in 1999.

However, in asking for direct army intervention, the Hazaras have not factored in that Quetta is by and large already under army control with the remainder under the FC. Plus, the man who runs the LeJ faction in Quetta, Usman Saifullah Kurd, is at large after escaping from jail in the cantonment on January 18, 2008. If the terrorists can strike at will under the current set-up, a veritable ‘martial law’ would make little difference.

More importantly, if another terrorist attack of such a monstrous scale were to unfold what would the Hazaras ask for then as a solution? The next option would then only be depopulating the city and that isn’t possible. With the state unable and unwilling to stem the tide of blood, thus, the options open to the Hazaras have shrunk and they are extremely vulnerable.

Both the Hazaras and the Baloch have been on the receiving end of terrorism from non-state actors and those tacitly sponsored by those with power. The difference, however, is that the knife’s edge is sharper for the Hazaras whose losses are unsustainable given their vulnerable numbers. The Baloch are not necessarily in this dire predicament.

The solution for the Hazaras doesn’t lie in army rule because that will not rein in those who target them – they are men groomed precisely for proxy wars elsewhere. The group that has struck twice must already be planning another mass killing given that the state is not keeping their designs in check.

The Hazaras will have to be vigilant to prevent such attacks and at the same time struggle along with the Baloch for a Balochistan whose ethos should be secular and tolerant rather than sectarian as it has become today.