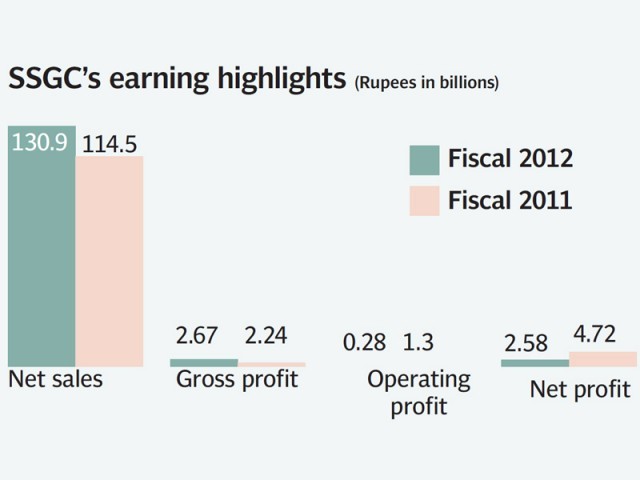 In case the petition is decided against the company, it will incur a loss of Rs4.413 billion for the year instead of a profit.

Sui Southern Gas Company (SSGC) has posted a profit after tax of Rs2.58 billion for fiscal 2012, against Rs4.72 billion earned in the previous fiscal year. Earnings per share (EPS) clocked in at Rs2.93 per share, against Rs5.36 per share in the same period of the previous year.

The company has said in its annual results statement that the results are subject to change, depending on the decision of the Sindh High Court on a petition filed by SSGC.

When asked why the company’s profits took a hit in 2012, the SSGC replied that it operates with a fixed rate of return (before financial charges and tax) of 17% per annum on the net average of its fixed operating assets under a tariff regime governed by the Oil and Gas Regulatory Authority (Ogra).

However, its actual return (before financial charges and tax) is fast declining owing to Ogra’s refusal to enhance the limit that can be charged under the unaccounted-for-gas (UFG) head and certain other benchmarks fixed by the authority.

Since the company operates with a fixed rate of return, the profit margin is not directly affected by an increase in the price of gas purchased, it said. However, the cost of gas is increasing at a significant rate, which affects the value of UFG disallowed and which adversely and significantly impacts the company’s bottom-line, the company said.

In order to reduce UFG on a countrywide basis, a number of efforts are being exercised including the creation of Strategic Business Units for greater responsibility and accountability, an aggressive plan to change meters, and the rectification of overhead and underground leakages.

In addition to these steps, the company has initiated a $200 million World Bank-financed Natural Gas Efficiency Project with the Government of Pakistan. The project aims to reduce UFG levels to around 6.7% by financial year 2017, it said.

SSGC’s gas losses are currently around 10-11%, which are affecting the profitability of the company, said Atif Zafar, analyst at JS Global Capital.

Like other government-owned companies, the SSGC is also heavily overstaffed, which directly reflects on the profitability of the company. The incumbent government has regularised thousands of employees at the SSGC over the last few years.

is the growth in profits for the bank to Rs1.255 billion for 2012 against a profit of Rs1.628 billion in 2011, according to a notice sent to the KSE. Earlier, the Fauji Foundation sealed the acquisition of 100% stake of the bank from the Army Welfare Trust at Rs24.32 per share.

is the increase in profits of the company to Rs1.32 billion in 2012 compared to 2011’s profit of Rs1.14 billion. The company also announced a final cash dividend of Rs4 per share and bonus share issue of 10% with the results, according to a notice sent to the KSE.