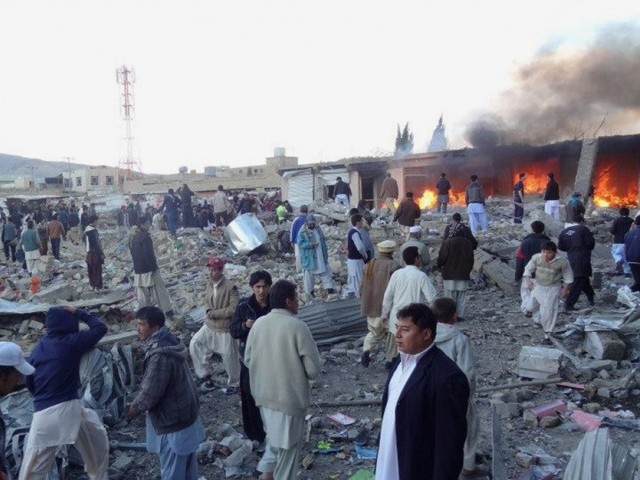 People gather after a bomb targeting Shia Muslims exploded in busy market in Hazara town, an area dominated by Shias on the outskirts of Quetta, on February 16, 2013. PHOTO: AFP

QUETTA: The death toll from a bombing in Quetta has climbed to 80, a senior security official said on Sunday.

He said the figure could rise because 20 people were critically wounded in the attack on Saturday in Quetta’s main bazaar.

The powerful bomb in a water tanker ripped through a packed bazaar in Hazara town, an area dominated by Shias on the outskirts of Quetta at around 6:00 pm on Saturday.

Quetta city police chief Zubair Mehmood said the water tanker, which officials said was packed with some 800 kilograms of explosives, was placed near a pillar of a two-storey building, which collapsed in the blast.

“We fear that several people have been trapped inside. Rescue work is ongoing but I see very little chance of their survival,” Mehmood said.

Nasir said the bombing “was a sectarian attack, the Shia community was the target”.

A spokesman for the banned group Lashkar-e-Jhangvi claimed responsibility for the bombing.

Provincial home secretary Akbar Hussain Durrani said the dead and injured included women and children, and confirmed reports of people trapped under rubble at the site of the collapsed building.

“We fear more casualties. We have announced an emergency in hospitals,” he told AFP.

Officials and witnesses said an angry mob initially surrounded the area following the bombing and were not allowing police, rescue workers and reporters to reach the site.

“They were angry and started a protest, some of them pelted police with stones,” Durrani said, adding that authorities and medical personnel were eventually able to gain access.

“The terrorist attack on the Hazara Shia community in Quetta is a failure of the intelligence and security forces,” Magsi said while touring a hospital.

“We had given a free hand to security (forces) to take action against terrorist and extremist groups, but despite that the Quetta incident took place.”

Earlier,  Hazara Democratic Party’s vice-chairman Azizullah Hazara, while addressing a press conference, gave an ultimatum to carry out a targeted operation against the responsible people within 48 hours, or their party will protest in front of Balochistan High Court on a daily basis.

He further said that they won’t let this conspiracy against Hazara community be successful. Azizullah announced that they will protest in front of Pakistan embassies, offices of United Nation and human rights organisations across Asia.

In Quetta, Student Federation held a protest in front of press club and blamed the governor rule and said such incidents are taking place despite security forces’ presence. They also demanded a crackdown against attackers within 48 hours and said that the injured should receive best medical facilities.

People of Sindh also commiserated with the affectees of Quetta blast by observing shutterdown strikes in several cities. Shia parties held demonstrations throughout the province.

In Hyderabad, few enraged people resorted to firing to scare people into closing their shops and burnt a few tyres to protest.

In Daharki, Shia parties started a rally from Hussaini Imam Bargah and staged a sit-in on National Highway. In Mithi, Shia parties protested on Kashmir Chowk.

In Lahore, Majlis-e-Wehdat-e-Muslameen’s members protested outside the Governor House. Rangers surrounded the area while members offered Zuhr prayers. Protesters then held a sit-in on Mall Road and demanded the arrest of terrorists within 48 hours. Police also put barricades to deal with any untoward incident.