Zubair Afridi reports on the making and smuggling of Hashish from Khyber Pakhtunkhwa. 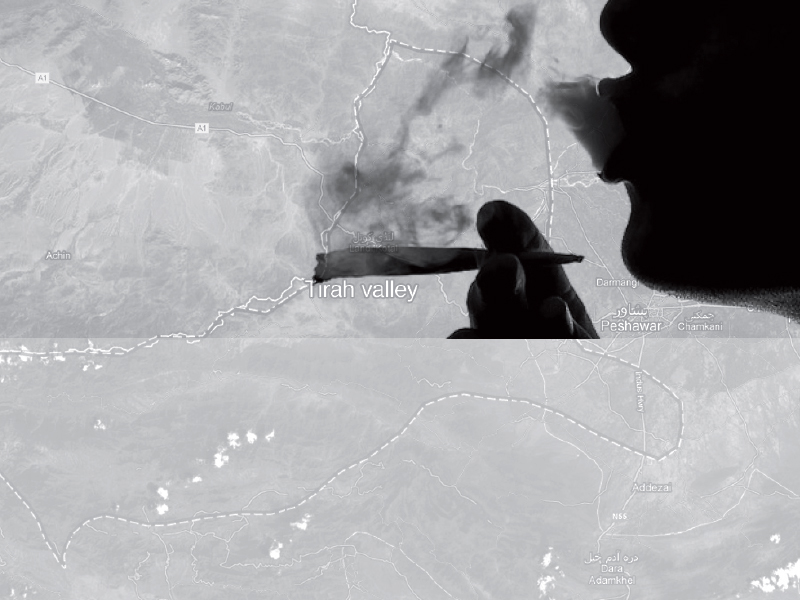 Trekking through the secret, narrow passes in the mountains of Tirah, Landikotal and Jamrud tehsils of Khyber Agency, Haji Zubair Afridi and his aides smuggle goatskins in a pickup through Kacharo Kosa. Hidden underneath it are kilos of hashish – what Afridi refers to as his “black gold.”

Their final destination is a clandestine warehouse in Jamrud Bazaar, where Zubair exchanges the animal skin for bundles of cash. He hands out Rs5,000 to the pickup driver and Rs3,000 to a teenage assistant. The rough terrain, he says, has nothing much to offer except for the unending clashes between rival groups. It is, however, rich in abundance as far as hashish is concerned.

The moderate climate and red soil make it a child’s play for Tirah Maidan’s local farmers to grow cannabis. The crop’s stems are hung for two weeks to dry, after which a thin cloth is used to carefully thresh the plant to extract the dust power called “garda.”

Converting garda into consumable hashish is a long process. It must be wrapped inside a fresh goatskin for as long as three months until it turns into a greenish black substance. One skin can contain around 10 kilogrammes of garda.

The skin provides the oil needed to solidify ingredients, said Nisar Afridi, a veteran hashish dealer. The longer the garda is kept inside the skin, the better it tastes. June, July and August are the best months to do this, but direct sunlight should be avoided so the final product is not dry, he added.

Hashish is supplied to Khyber-Pakhtunkhwa as well as Islamabad, Lahore and Karachi where consumers are willing to pay nearly 10 times more than those in Jamrud, Nisar said.

“We don’t transport it. We just sell it in the agency,” he said, adding that people buy it from them and smuggle it through the Karkhano check post on mules, horses and in vehicles.

Taj Muhammad, a real estate agent and builder in Hayatabad, while loading his cigarette with moist green hashish said that if the hashish is dry, it loses its effect and gives a headache. He has been addicted to it for 15 years and believes it is less harmful than tobacco.

There are no official statistics on total hashish production in the valley. A tribesman familiar with the matter, however, said that a banned outfit controls the price and is heavily invested in the business. In November and December last year, a kilogramme was being sold for Rs65,000 while in June, July and August, the supply increased, dropping the price down to Rs45,000. There are about 250 shops selling hashish in the Wazir Dandh area, Jamrud.

Wahid Gul Afridi, a khasadar force official, is known for recovering thousands of kilogrammes of hashish and has been especially posted at a checkpoint to do just this.

“My instincts can catch hashish dealers, even when the drugs are hidden in vehicles,” he said, adding that he can sense traffickers by their “strange looks”. Gul claims that his resolve has not been broken by the numerous bribes offered to him. “I do this work to get a promotion; I don’t do it for bribes.”

Correction: An earlier version of the article incorrectly mentioned that farmers grow poppy. The error has been rectified.

The Land of Pure Hashish is now Colorado, much closer and safer than where ever this god fore saken place is. Hit me up and come visit Alma Colorado and we can visit massive indoor grows and hash labs all day long. Oh, and best of all, perfectly legal since A-64 passage! It really does get you more high when it's legal, trust me!

Hash is in no way related to poppy, so what does this tell you about the article!!

Hashish is not addictive

Those who are involved in Drug Trade must be hanged rather than portrayed as Heroes in any Journals.

There is an inherent scientific error in this piece, an update or apology is required:

You state that hashish is produced from poppy (Papaver somniferum) this is incorrect the opium poppy is used to produce opium and heroin. The correction you are looking for is as follows:

Hashish is produced from Cannabis Indica NOT Papaver Somniferum.

You also state someone is addicted to hashish for 15 years, there is no medical evidence to support hashish as being an addictive substance unlike opium and heroin.

If you wish to provide media to a worldwide audience at least ensure your facts are well researched and correct.

"The longer the garda is kept inside the skin, the better it tastes." This is wrong the more it spends time in skin after some time the more it rots and becomes of no value. The more fresh it is the more better. Life can be extended by baking the garda to a black hard substance melted by heat.

Poppy has nothing to do with Hashish. And Teerah is not a moderate temperature area, it's as cold as our Murree and receives snowfall every year.