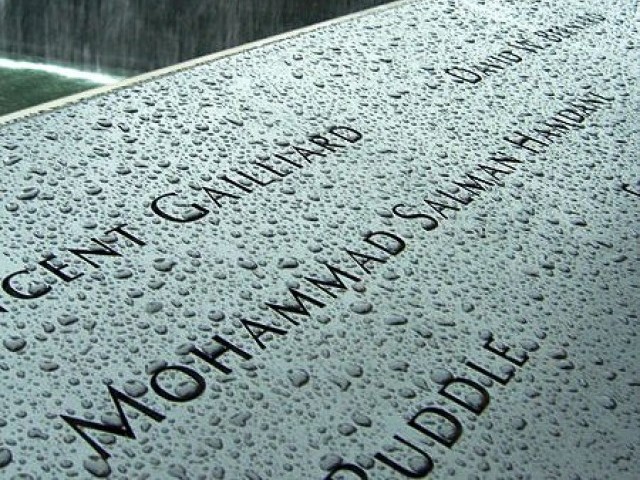 The name of Salman Hamdani is among those inscribed on bronze panel S-66 of the South Pool of the National September 11 Memorial in Manhattan, as seen on December 6, 2011. PHOTO: WIKIPEDIA

Once suspected to be a terrorist, Karachi-born Pakistani-American Salman Hamdani is finally being recognised as a hero. The 26-year-old New York resident went missing on September 11, 2001, shortly after American Airlines Flight 11 crashed into the north tower of the World Trade Centre.

In the chaos of that day, his mother Talat Hamdani was initially not worried when she couldn’t get in touch with him and assumed that Salman, an NYPD cadet and paramedic, had gone to work as usual. But then the night came and went and he still didn’t get in touch. The next day she went to Salman’s office at the Rockefeller University in Manhattan, only to learn that he had not shown up for work on September 11.

Talat then joined the scores of people frantically searching for their loved ones in Manhattan. But Salman was nowhere to be found; neither the hospitals nor the morgue had any record of him.

In the atmosphere of suspicion that followed after the attacks, the Hamdanis were visited by NYPD detectives who confiscated a photo of him posing with an Afghan student. Soon after, the New York Post published a story on Salman titled: “Missing or Hiding? — Mystery of NYPD Cadet from Pakistan.” The story, which claimed that Salman was being sought by the FBI, also mentioned that he had been seen leaving for work “Koran in hand”, and implied that he was being considered a suspect in the 9/11 attack. In the wake of this story, even some missing posters put up by his brother Zeeshan were torn down. For six whole months, the Hamdanis did not know the fate of their oldest son.

But then in March 2002, two police officers came to their house to tell them that Salman’s remains had been identified. He had died at ground zero, and his EMT bag had been found along with his remains. Salman, far from being involved in the attacks, had headed straight for the Twin Towers after the first plane hit to try and help people, and that’s what he had been doing when the tower fell.

Over 200 days after his death, his funeral was held at New York’s Islamic cultural centre, with his coffin draped in the American flag. In April the same year, the Rockefeller University announced the establishment of the Shaheed Mohammed Salman Hamdani Memorial Fund, a scholarship meant to benefit Pakistani-American students. Salman’s name is also explicitly mentioned in the Patriot Act, though it does not appear in the first responders section of the 9/11 memorial. And now, the street on which he lived, 204th in Bayside, Queens will bear his name. The decision was made in a unanimous decision by the local community board. For Talat Hamdani, who has since become a prominent activist speaking against the stereotyping of Muslims in America, it is a long-awaited vindication. Still, she says that she wants her son’s name included in the first responder section of the 9/11 memorial. “Justice takes a long time,” she was quoted as saying by CBS, “but truth does prevail.”