His words live on: In a desert of solitude, an oasis of admirers

His words live on: In a desert of solitude, an oasis of admirers 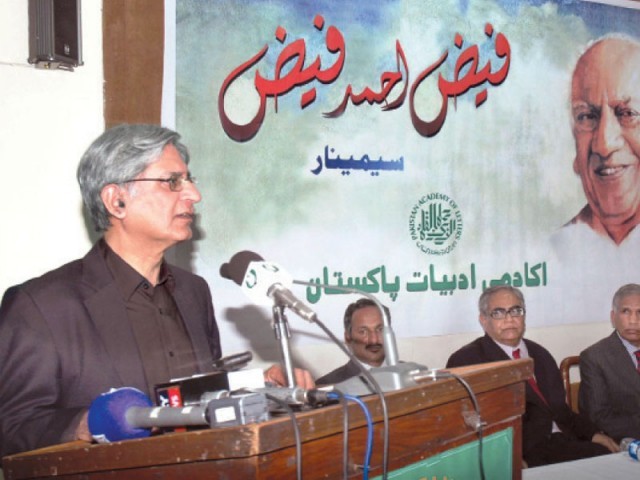 Weeks before his death in 1984, legendary Urdu poet Faiz Ahmad Faiz expressed a great desire to visit his birthplace — Kala Kader village in Sialkot district. During the days he spent in the village, Faiz donated some money for the renovation of a local school and asked locals about the needs of the community.

“He had a deep love for the impoverished and underprivileged people of the world,” Senator Aitezaz Ahsan said at a seminar in Islamabad on Wednesday. “But most of all, he loved this land…where he was born, to which he belonged.”

Ahsan, who arranged for that last trip Faiz took to his ancestral village, was presiding over a seminar organised by the Pakistan Academy of Letters to commemorate Faiz’s 102nd birth anniversary.

Ahsan said Faiz resembled Gautama Buddha, because like Buddha, Faiz never spoke bitterly and had a forgiving quality to him.

“Not only was his smile ‘Gautam-y’ (as mentioned by Major Ishaq in an essay on Faiz), but his personality was also ‘Gautam-y’,” he said.

Other speakers agreed that Faiz always spoke for the rights of the oppressed and was always optimistic and hopeful of creating a better world.

“I never heard a negative thing from him,” said Attaul Haq Qasmi, an author and columnist. “He had a great love for the deprived people of the world.”

Ravish Nadeem, a writer and critic, read an essay on Faiz at the seminar. He said, “Faiz was a poet who, instead of lounging on state balconies, loved and lived for the common people living in the streets.”

“Faiz was a Pakistani, an Asian, a Marxist and a humanist,” Iftikhar Arif, famous Urdu poet, said. “And I see no confrontation between these different aspects of his life.”

Perhaps the most intellectual speech of the day was given by Professor Yusuf Hassan, a poet, thinker and educationist.

Hassan talked about the concept of an aesthetic ideal in the poetry of Faiz. He said whenever Faiz is discussed in literary gatherings, people harp on the social and political aspects of his poetry, but the artistic and aesthetic sides of his works — which are also the identity of any poet — are ignored.

Hassan said the aesthetic and artistic expressions of Faiz’s poetry must be explained so that his creativity can better be relayed to the working class and the younger generation of creative artists.

Free Education: Petitioner calls for implementation of Article 25-A