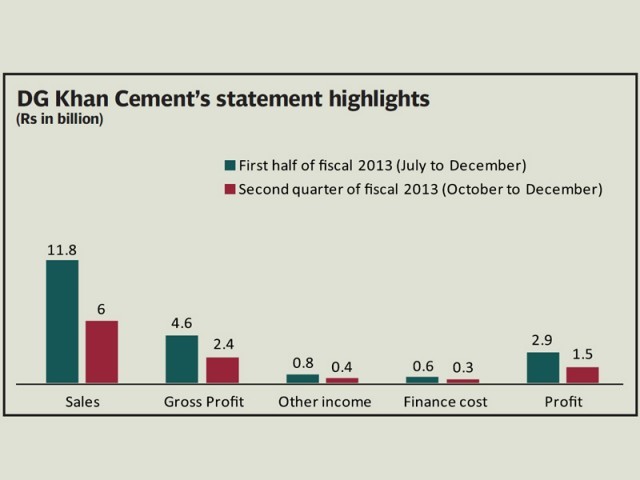 The DG Khan Cement Company (DGKC) released its half-yearly results on Monday, announcing that earnings grew nearly 127% in the first six months of fiscal 2013 (July-December) (1HFY13) over the same period of the preceding year. On a quarter-to-quarter (QoQ) sequential basis, however, DGKC’s net profits grew by a modest 2.5% in the October-December 2012 (2QFY13) period over the July-September 2012 (1QFY13) period; but were higher by 54% in 2QFY13 as compared to the same period of the previous year.

The company’s operating profitability improved by nearly 59% YoY in the period under review.

Notwithstanding the spectacular rise in earnings, DGKC’s stock closed lower on Monday by Rs0.52 (0.93%) to close at Rs55.49. Analysts say that the market was disappointed in the ‘lower-than-expected earnings’.

According to the result statement, the company’s dispatches actually decreased 1% in 1HFY13 over the preceding year, due to a 15% year-on-year (YoY) fall in exports. On the bright side, the company posted healthy 6% YoY rise in local sales driven by healthy demand growth in the north of the country amid aggressive utilisation of development funds, says a note issued by brokerage house BMA Capital.

The growth in local sales, coupled with an average 8% hike in cement prices in the north to Rs440 per bag, took net sales for DGKC up 11% YoY to Rs11.8 billion in 1HFY13, BMA Capital’s note added. The healthy growth in net sales was further magnified in profitability thanks to a 35% drop in finance costs to Rs577 million as the company has entered debt retirement phase, said BMA Capital. Significantly lower coal costs (cheaper 27% YoY) and higher retention levels also helped improve gross margins by 6.5 percentage points to a staggering 39%.

On a QoQ basis, DGKC’s revenues improved by a nominal 1% over 1QFY13 on account of higher retention prices in the local market, says an analyst report issued by Global Securities’ Research department. DGKC’s cost of goods sold clocked in 3.4% lower in than the previous quarter due to falling coal prices, with total selling and distribution expenses coming down to Rs313 million in 2QFY13 due to a higher proportion of local sales as compared to the previous quarter.

Meanwhile, DGKC’s other income increased 17% to Rs416 million in 2QFY13, primarily due to dividends received from Nishat Mills, Nishat Chunian, and MCB Bank during the period, said analysts.

Elixir Securities estimates that DGKC’s share in the domestic market increased by a percentage point to 12% by the end of 2QFY13, as local sales accounted for 77% of the total in 2QFY13, as compared to 65% in 1QFY13.