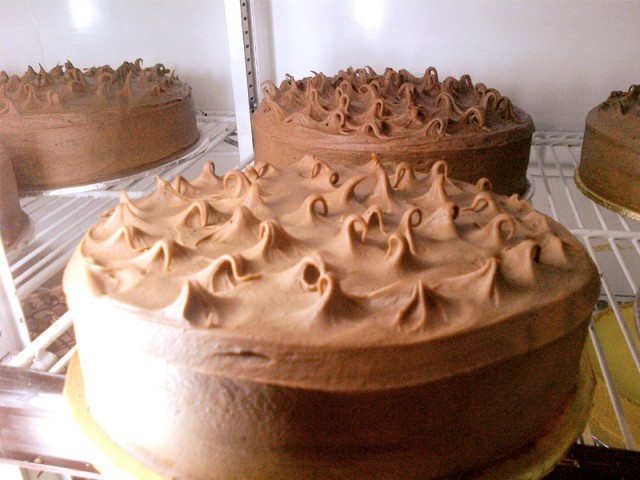 Nandos gets a five star rating because of impeccable service. PHOTO: HASSAAN GHAZALI

The infamous words uttered by Marie Antoinette may have left her sans a head, but at least she lost some weight. The same is not going to be true for Lahoris seeking something to tickle their sweet tooth.

Finding the best chocolate cake in Lahore can’t be an easy task, and it’s a dirty job which someone has got to do. It is important to separate style from substance so one must first dispense with the slew of outlets selling so-called artisanal chocolate cakes. Sold out of the at-home kitchens mushrooming all over the city, these fancy creations may look artistic with that fondant and ganache, but betray an insipidness and lack of character underneath all that food colour and sugar with just one bite.

Often billed as one of the most over-hyped restaurants in the city, The Polo Lounge has left an indelible impression on Lahore’s gastronomy. Although pricey, their Chocolate Puddle Cake is a hot seller and is well presented in a dish with an accompanying scoop of ice cream. As you break through the cake to let the piping hot chocolate sauce ooze out, it may seem like the Puddle Cake and the ice cream are a match made in heaven — but you would be wrong; for the problem with their dish is that the quality is inconsistent. The freshness of their pre-prepared cakes is not always guaranteed and I have often complained that my cake has the yielding texture of halwa and none of the firmness associated with a good chocolate cake. Sadly, their ice cream is either of a poor quality or is not stored properly so don’t be surprised if you find yourself biting down on horrid ice crystals from time to time. If you manage to find a waiter, be sure to complain about the inconsistencies in food and service. (Rated 2/5)

Although they have a smaller outlet in the Defence Housing Authority, one of the best kept secrets in Lahore is the chocolate cake at Nando’s on MM Alam Road. You wouldn’t normally associate a restaurant known for fiery chicken with a standard dessert, but these boys will convince you of their ability to soothe your palette. Priced at just over Rs200, the Nando’s Chocolate Fudge Cake is a lifesaver for those who have just happened to hit the high notes on the Scoville Scale. This cake doesn’t make you feel like you’re eating piles of sugar and the chocolate comes through really well. There are some problems with the supply chain as the cakes are shipped in from Karachi so they often run out, all the more reason to try one as soon as possible. It gets a five star rating because of its impeccable service. (Rated 5/5)

With outlets in Gulberg and the Defence Housing Authority, Masooms or the Pancake Lounge offers what is probably the best chocolate cake in Lahore. For depth of taste and an even texture, their Malt Chocolate Cake wins hands down. Don’t let the congested seating or slow service in their outlets dissuade you from tucking into some of the good stuff next time you’re in the neighbourhood. This is truly a cake with character and the quality is consistent. Priced under Rs200 for a slice, you will find yourself licking the icing off your plate long after the cake itself is finished. (Rated 4/5)

The writer is a food critic and enthusiast based in Lahore who is also a development planner and lawyer.