Pakistan condemns use of ‘blatant force’

Pakistan condemns use of ‘blatant force’ 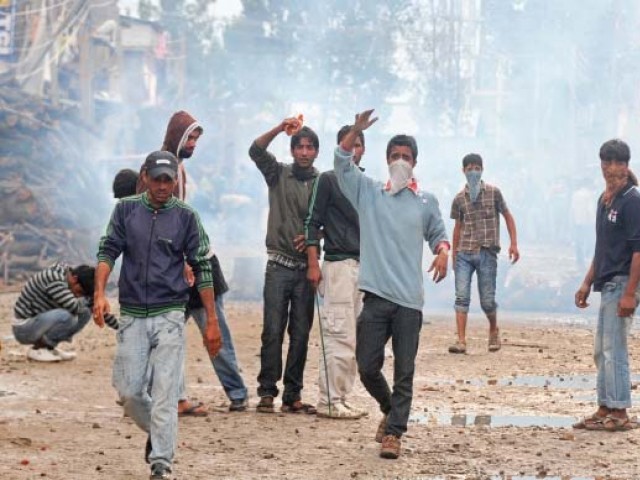 Kashmiri protesters are engulfed in tear gas during a clash with Indian police. PHOTO: AFP

ISLAMABAD: Pakistan on Tuesday condemned the use of what it termed “blatant force” by Indian security forces against the people of Kashmir, as more violence has been reported in the disputed territory.

In a statement issued here, Foreign Minister Shah Mahmood Qureshi urged India to exercise restraint instead of resorting to violence and procrastination. Indian security forces on Monday shot and killed 18 civilians in the deadliest day since the protest began in Kashmir three months ago.

More than 80 Kashmiris were killed this summer in widespread anti-India demonstrations.

The latest protests in Kashmir were meant to condemn the reported desecration of the Quran in the United States.

Foreign Minister Qureshi said that the use of force was not the solution to the Kashmir problem.

“India should work towards finding a solution to the Jammu and Kashmir dispute in accordance with the relevant UN resolutions and aspirations of Kashmiris,” he added.

Qureshi expressed Pakistan’s unequivocal solidarity with the people of Jammu and Kashmir.

“Pakistan will continue to extend its political, moral and diplomatic support to the people of Jammu and Kashmir for their right to self-determination,” he said. Pakistan and India fought at least four wars over Kashmir. New Delhi calls the disputed territory as an integral part of India while Islamabad insists that it is an unfinished agenda of 1947 partition.

During General Pervez Musharraf’s rule, both countries were believed to be inching closer to finding an “out of the box” solution to the decades-old problem poisoning relations between the nuclear-armed neighbours.In July this year, the foreign ministers of the two countries met but failed to agree on a roadmap for reviving the peace process which India suspended after the Mumbai attacks in November 2008.

Malaria may affect up to 2m