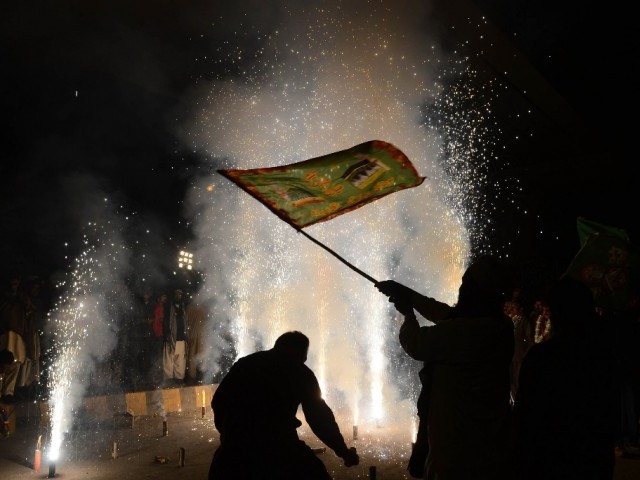 People celebrating on the eve of Eid Mildun Nabi in Lahore on Thursday. PHOTO: AFP

The Dera Ismail Khan police foiled an attempt to target Eid Miladun Nabi processions and recovered explosives from different areas of the city along with arresting two members of a banned militant outfit.

In Zafarabad, police recovered two rocket launchers, two Russian made time bombs, one 30-bore revolver, bullets and a dagger. In Tariqabad, 75 kilogrammes of explosives were seized during a raid at a house and the owner, Bilal, was arrested from the premises. He is said to be a member of a banned outfit and officials have registered an FIR against him and his accomplice Qari Zahir, added Kundi.

In the third raid, police confiscated 2,160 bullets, 38 grenade launchers, 19 rocket propelled grenades, ammunition for rocket launchers and 25 kg of explosives. The police also arrested a suspect identified as Kamran and an FIR was registered in Kulachi police station against him.

Lauding the efforts of the police, Kundi said intelligence information was collected while interrogating a constable arrested following the blast in DI Khan which targeted a Muharram procession earlier.

Meanwhile, security was also beefed-up in the provincial capital as more than 2,000 policemen were deployed in the walled city to provide cover for Eid Miladun Nabi processions.

“Due to the public holiday, markets were less crowded so the police did not face a lot of difficulty in security arrangements,” said a police official, adding that out of the 2,000 policemen, 800 were sent to cantonments and other parts of Peshawar.