Misbah calls the series one of the bigges­t challe­nges of his captai­ncy tenure but says he is confid­ent.
By Reuters
Published: January 18, 2013
Tweet Email 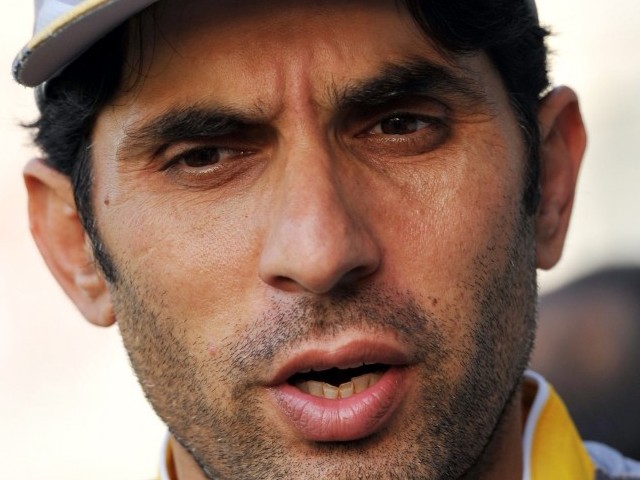 A file photo of Misbahul Haq while speaking to media. PHOTO: AFP/FILE

KARACHI: Pakistan need to “stand up and be counted” against South Africa’s pace attack in their series with the world’s top-ranked test nation starting next month, captain Misbahul Haq said on Friday.

“This series is one of the biggest challenges of my captaincy tenure but I am confident that we can pose a serious threat to South Africa,” Misbah told Reuters.

The 16-member Pakistan squad leave on Sunday for a two-month tour that begins with a three-test series from February 1. Pakistan are touring South Africa for the first time since 2007.

“The coming series is very important for Pakistan cricket because we have mostly played our cricket in South Asia or the UAE since 2010,” Misbah added.

“The last few years have been a big challenge for Pakistan cricket and the players have come through well most of the time. But this is a tour where we have to play our best cricket.”

No test playing nation has visited Pakistan since March, 2009 when militants attacked the Sri Lankan team in Lahore.

Misbah said he was confident about the series because Pakistan, like South Africa, had a strong bowling attack.

“Until now our spinners have come through for us now it is the turn of the pace bowlers to deliver. I am confident that players like Umar Gul and Junaid Khan will be our strike bowlers and we have a good spin backup in Saeed Ajmal,” he said.

Misbah said his biggest concern was putting substantial runs on the board agsinst an attack boasting Dale Steyn, Morne Morkel and Vernon Philander.

“South Africa has one of the best pace attacks in the world so we have to stand up and be counted. If we can post decent totals in the tests I know our bowlers will deliver.”

Misbah said his team’s main strength had been their unity which had helped them whitewash England in early 2011 in a three-test series in the UAE.

“No one gave us a serious chance of beating England but we did that because we have gelled well as a team. That will be our main strength in South Africa despite their formidable batting and bowling resources,” he said.

South Africa completed a 2-0 series win over New Zealand on Monday after thumping the visitors by an innings and 13 runs, only their second home test series win in four years.

The Proteas have risen to the top of the International Cricket Council’s test team rankings thanks to their wonderful away form during which they have won back-to-back series in Australia and England and remain unbeaten on their travels since 2006.