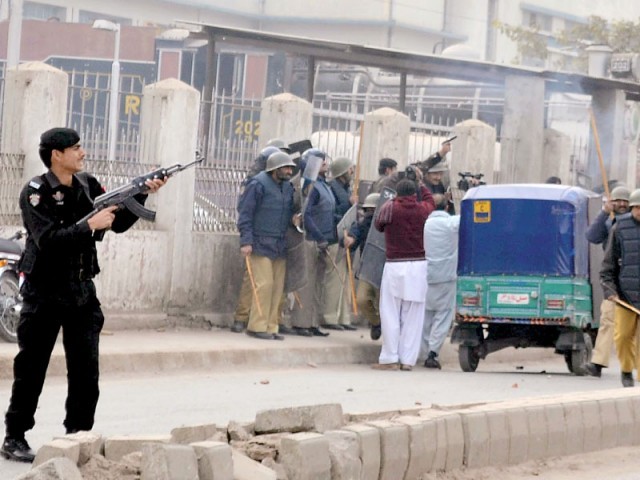 Policemen use batons, resort to aerial firing and tear gas to disperse protesting tribesmen in front of the Peshawar Press Club on Thursday. PHOTO: INP

After a 36-hour-long protest, tribesmen from Khyber Agency have decided to bury the bodies of 18 men they alleged were killed by security forces in a midnight raid on Tuesday.

On Wednesday, hundreds of tribesmen marched on foot from Bara to Peshawar along with the bodies of 15 of the victims to lodge their protest with the government — a demonstration that turned violent late night when police fired tear gas and opened water cannon on the protestors.

They demanded action against those responsible for the killings and the immediate withdrawal of the army from Bara. Security forces have, however, denied the allegations and said the men were attacked by militants.

The bodies have now been shifted to Levies Centre Shah Kas in tehsil Jamrud of Khyber.

A 27-member committee, comprising regional elders and politicians, has been constituted to hold talks with the governor today (Friday).

Talking to The Express Tribune, Pakistan Tehreek-e-Insaf (PTI) leader in the Khyber Agency Iqbal Afridi said that following unsuccessful negotiations with Khyber-Pakhtunkhwa (K-P) Governor Masood Kausar on Wednesday, protesters refused the compensation of Rs400,000 for each victims’ family and continued their sit-in outside the Governor House on Sher Shah Suri Road.

He revealed that after the talks yielded no results, late night on Wednesday, police fired tear gas and opened water cannon on the protestors and took the bodies into their custody.

Afridi said on Thursday that the tribal elders and political parties’ members have now gathered in Bagh-i-Naran Park in Hyatabad, Peshawar and have decided that they will bury the bodies. However, he added that the tribesmen will bury the bodies today (Friday) and after that they will reconvene at the same place to decide the future course of action.

On the second day of the protest, police baton charged and fired shells to disperse off the demonstration outside the Peshawar Press Club. In response, protesters hurled stones at authorities injuring some students and a private TV cameraman in the process.

Sobat Khan, another tribal leader of the protest, said that on Wednesday when the police fired shells at the mourners staging the sit-in in front of the Governor House, panic spread among the protesters and taking advantage of the situation, police took away the bodies in trucks.

An official of the Sharkai Police Station said that four students were arrested from the protest site as well.

Meanwhile, K-P Governor Kausar outlined a comprehensive set of steps to resolve the grievances and distress of the families of those killed in Bara.

Speaking to a delegation of Jirga members appointed by the family of the deceased, the governor expressed profound sorrow for the tragic loss of the families and resolved to look after their welfare and well being.

The governor told the Jirga members that the army operation in Bara was a strategy of last resort for the government.

Local tribes are responsible for maintaining law and order in their respective areas; if they can do so, the army will be withdrawn as soon as possible, the protestors were told.

He also declared that indiscriminate mortar shelling shall stop.

The members of the Jirga also approved of these initiatives and according to tribal traditions this process seals the agreement.