Police blocke­d off, suppor­ters chased them out of area.
By Our Correspondent
Published: January 16, 2013
Tweet Email 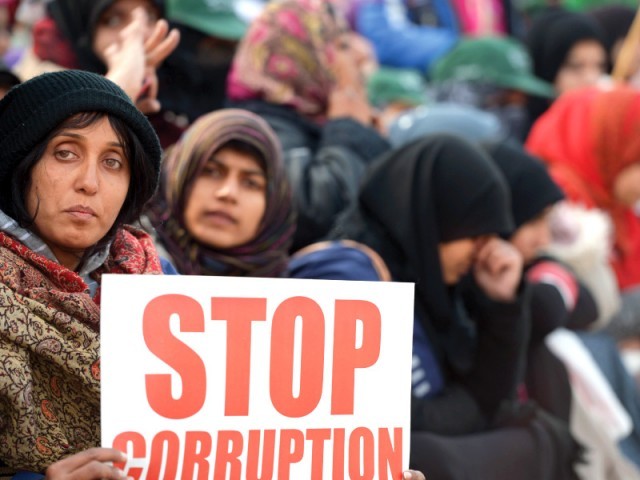 Dr Tahirul Qadri’s long march and the subsequent sit-in could have seen its end before even taking off if he was locked up Tuesday morning.

However, unarmed women supporters of the Minhaj-ul-Quran International (MQI) chief saved him from getting arrested by police commandos who stormed his bullet-proof container soon after he ordered his followers to shift the venue to D-Chowk from Jinnah Avenue.

The die-hard supporters not only stood between the container and the advancing police contingent, some of them even chased the cops out of the area, said a member of Dr Qadri’s security staff. He added that some men were standing close by but it took them time to reach the place after police’s surprise move.

“A group of police commandos surrounded Dr Qadri’s cabin and resorted to heavy aerial firing. They emptied their guns’ clips and then pulled out their pistols but nothing could deter the brave women,” said the security volunteer.  Witnesses said only a handful of men and around a hundred women were present near the MQI chief’s cabin when the police carried out their raid.

Some of the women actually suffered minor injuries in their effort to save their leader from the police, said a witness.

“Tahir, Tahir, Tahir,” chanted the women, standing to one side of Dr Qadri’s cabin, on seeing him appearing behind the glass wall for his Maghrib prayers. Their slogans overpowered their male counterparts’, who were standing on the other side.

“Dare not even think of arresting our leader while we are alive,” a supporter, Shazia Mansoor warned the authorities. She said all women who accompanied Dr Qadri to Islamabad were determined to stay with him till the end and none of them could be deterred by any threats.

Dr Qadri’s “million-man march” was one of its kinds in the country for having a record breaking number of women participating in it.