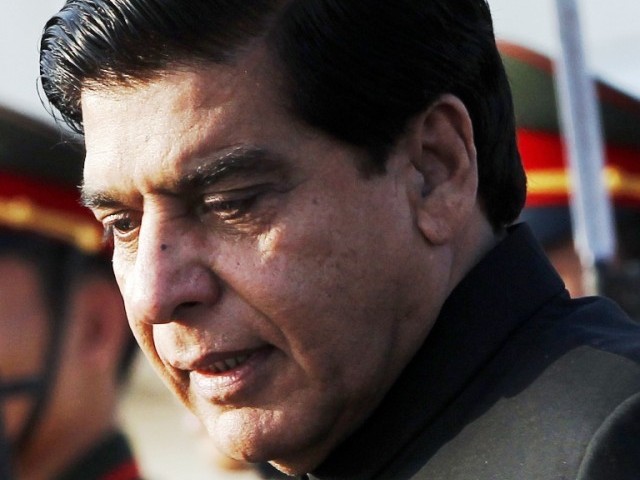 KARACHI: Fawad Chaudhry – aide to Prime Minister Raja Pervaiz Ashraf –  said on Tuesday there was “no doubt” the country’s powerful military and Supreme Court were working together to topple the government.

Chaudhry was speaking to Reuters after the Supreme Court ordered the arrest of Ashraf in the Rental Power Plants case.

PM Ashraf – popularly known as Raja Rental – was accused of receiving kickbacks in the rental power projects and of buying property in London from the money earned through corruption in various scams.

The Express Tribune approached stakeholders for their comments on this recent development.

“It’s an order from the highest court and will be obeyed but our [government’s] legal advisors are trying to find if Ashraf enjoys immunity in this case,” ANP Senator Haji Muhammad Adeel told The Express Tribune.

Expressing doubts over the timing of the court order and Tahirul Qadri’s long march, Adeel said he fails to understand why SC decided to issue the verdict now when the country is experiencing political turbulence.

While speaking to Express News, PPP leader Aitzaz Ahsan said Ashraf will remain the prime minster even if he is imprisoned.

“Ashraf will be the premier until a no-trust motion is moved against him,” he said.

MQM leader Wasay Jalil said it is premature to comment on the issue as they don’t have details apart from what has been broadcast.

Jalil also said they have not received any formal invite for the allies meeting scheduled to be held in Karachi today.

Threats to democratic process have escalated after the Supreme Court’s order, said the Human Rights Commission of Pakistan (HRCP).

“It is difficult to measure the misfortune of the people of Pakistan; on the one hand, we are still burying the Quetta blast victims and pondering over its consequences, while on the other hand Qadri has been haranguing an audience with double talk and lies,” HRCP said in a statement.

Refusing to comment on the merits of the rental power plant case, HRCP said it believes the attempts to regulate politics through judicial hustling have never been fruitful anywhere in the world.

“If nothing else, the judiciary has to weigh the consequences of its decisions on the state whose interest it is supposed to safeguard,” the statement said.

Reacting to news of the arrest order, US State Department spokeswoman, Victoria Nuland, described the situation as “an internal issue for Pakistanis to resolve, as long as it is resolved in a just and transparent manner that protects the constitution, protects the rule of law”.

The US embassy in Islamabad will remain shut on Wednesday for the third day due to security concerns, she said.