Long march: Walking in the name of ‘revolution’

Long march: Walking in the name of ‘revolution’ 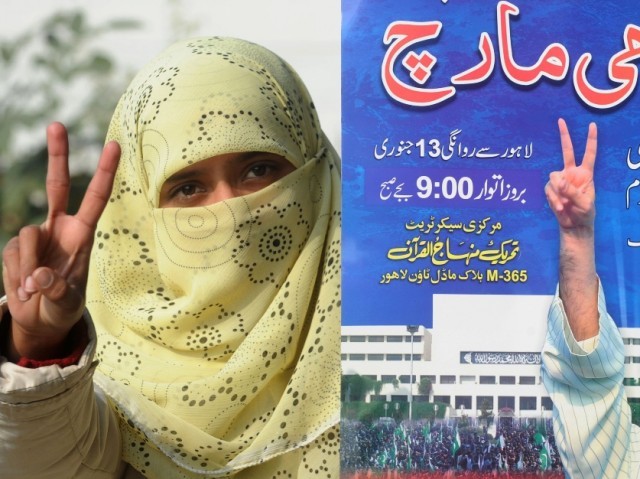 A supporter of Tahirul Qadri shows a victory sign at a protest march in Lahore on January 13, 2013. PHOTO: AFP

Waiting with bated breath for the arrival of her spiritual leader at the long march, Ayesha Bibi knew one thing – getting rid of the incumbent government was the only solution.

“I have never met him [Qadri] but I believe he is our [nation’s] liberator. He will bring a peaceful revolution,” Ayesha, 54, told The Express Tribune.

Bracing the harsh winds of winter, Ayesha Bibi, who came from Rahim Yar Khan some 600 kilometres away from the capital, pledged to continue her protest until the government meets Minhajul Quran International (MQI) chief Dr Tahirul Qadri’s demands.

Her younger daughter, Rimsha Bibi, 17, demanded the resignation of the present leaders. “We are here to support our leader as our rulers have failed to deliver,” she said.

The march put some impressive variety on display – the elderly, children, women and students alike took part in the procession.

A Pakistani-Canadian novelist, Nazneen Sheikh, who has never met the MQI chief herself, said she was here to support the voice of the poor coping with rampant state corruption. “Dr Qadri is representing the people’s voice. I support the cause of this long march,” she said terming Pakistan “a failed state”.

“We are the champion supporters of revolution — no matter who is leading us,” read a banner carried by Sajida Sadiq, an MSc Mathematics student from the University of Punjab.

“It is Islamabad’s Tahrir Square which will guarantee change in Pakistan,” said Farah Iqbal, whose husband Iqbal Ahmed is part of Dr Qadri’s personal security convoy.

In the crowds of hundreds of thousands was the chief editor of a daily newspaper from Faisalabad. “I’m not a party here. I only stand by the cause where people want to get rid of this so-called democracy,” said Mian Bashir Kamalvi.

While people from various walks of life, of all ages and ethnicities were part of this new movement, the whole episode did not go about without raising some crucial questions.

Heavy media campaigning, security arrangements and the use of millions of rupees to arrange the “million-man” march left many wondering where Dr Qadri was receiving his funding from.

“There is a hidden agenda behind Qadri’s programme,” said Imran Ahmed, a teacher by profession. “This [long march] is a western agenda to weaken Pakistan.”

Qadri’s suggestion that the military give input on the composition of the interim government has also raised several concerns.

Aamir Khan, a student of the Quaid-e-Azam University suggested the MQI chief was working on behalf of Pakistan’s military. He said, “Qadri also served as a lawmaker in Musharraf’s regime.”

When asked about funding, MQI Islamabad President Abrar Raza also denied the allegations. Talking to The Express Tribune, he said, “Dr Qadri is not a stooge for the military. We are simply seeking to ensure a corruption-free electoral process”.

Over 1, 000 teenagers also pledged to sit-in till their demands are met.