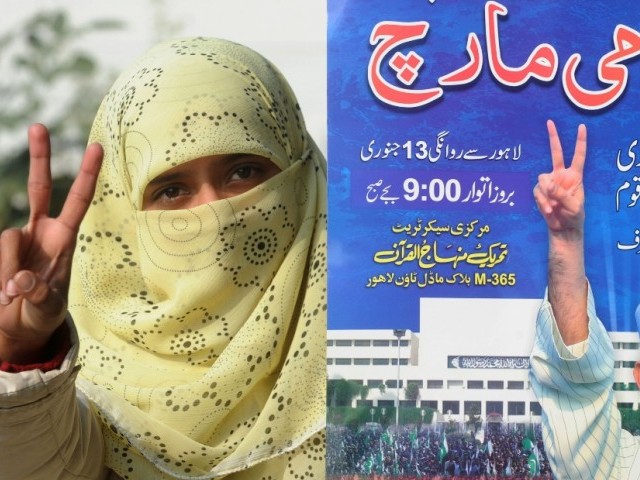 A supporter of Tahirul Qadri shows a victory sign at a protest march in Lahore on January 13, 2013. PHOTO: AFP

A large number of party workers and supporters had gathered in front of Minhajul Quran International’s (MQI) central secretariat in Lahore carrying the national flag.

Dozens of trucks, loaded with food items, camps and gas cylinders, also accompanied the caravan. Two trucks have been allocated for the media.

MQI spokesperson told the media that about 2,000 people had reached Lahore to join the march. Qadri’s supporters said that the number of participants will reach millions as more people join the caravan on the way.

The spokesperson also claimed that authorities were stopping buses from leaving their points to reach the starting point of the caravan. Around 25 vehicles have been stopped in Ravi Town and 15 in Wagah Town, he added.

Mohammad Farooq, 50, who managed to arrange two buses despite restrictions from local authorities, said he travelled from the eastern industrial city of Faisalabad to join the march, saying he was prepared to die for the cause.

“We are going to Islamabad to change the exploitative system and will not budge from our mission and even sacrifice our lives for it,” Farooq told AFP outside the offices of MQI.

Unemployed Mohammad Ahmed, 24, from the town of Pakpatan, said that Qadri’s followers would overcome any hurdle imposed by the authorities to reach Islamabad.

“I have joined this long march because it is against a corrupt system and people want to change it,” Ahmed said, holding a placard saying “Five per cent of people are occupying 95 per cent of resources”.

Allowing the long march to enter the federal capital, Interior Minister Rehman Malik announced the venue of the sit-in which will be Jinnah Avenue adjacent to Islamabad Chamber of Commerce Tower.

The interior minister also announced Rs5 million for the person who exposes the source through which Qadri was receiving billions of rupees.

Malik appealed to Qadri again to postpone his plan citing several threats to his life.

The exact venue of the sit-in was decided in a crucial meeting between MQI leaders and the administration of the Islamabad Capital Territory (ICT).

The delay took place as the route of the caravan changed at the last moment. Qadri had planned to visit the Data Darbar shrine before heading towards Islamabad, but due to security concerns, the roads to Data Darbar have been blocked. The caravan was also scheduled to pass through Mall Road but there is a protest going on in the area.

Qadri, speaking to the media outside his residence, said that the police in Multan, Bahawalpur, Rahim Yar Khan and other cities are not letting people come to the march, but “the long march will take place even if they have to travel on foot or motorcycles”.

He said that police also snatched 20 vehicles assigned for his personal security and 20 vehicles for the media. The march will begin after the vehicles are arranged for, he said.

He also claimed that containers filled with gases and acid have been placed in Islamabad in an effort to stop the march.

MQI’s security guards have also been deputed for the caravan’s safety.

An Interior Ministry spokesperson told The Express Tribune that over 15,000 police personnel have been deployed in the federal capital. Rangers and Frontier Constabulary (FC) is also assisting the ICT police.

All routes leading to the Constitutional Avenue Islamabad have been sealed, and hundreds of containers have been placed around sensitive areas including the diplomatic enclave.

“Today in the evening, Interior Minister Rehman Malik will brief the media about the current security arrangements for participants of the long march,” said the spokesperson.

Chief Commission Islamabad Tariq Mehmood Peerzada said that 22,000 security personnel have been deployed in the federal capital for security.

Mobile services were also suspended in areas of Lahore that come in the route of the caravan, Express News reported. The areas include Ravi Town, Model Town, Shahrah-e-Quaid-e-Azam, Minar-e-Pakistan and Imamia Colony. According to government officials, the decision was taken due to security threats.

Quetta carnage: Terrorism can be wiped out in 90 days, says Imran Khan