Every well-wisher of democr­acy should hope that Qadri’s Long March in Islama­bad turns out to be a non-event.
By Editorial
Published: January 13, 2013
Tweet Email 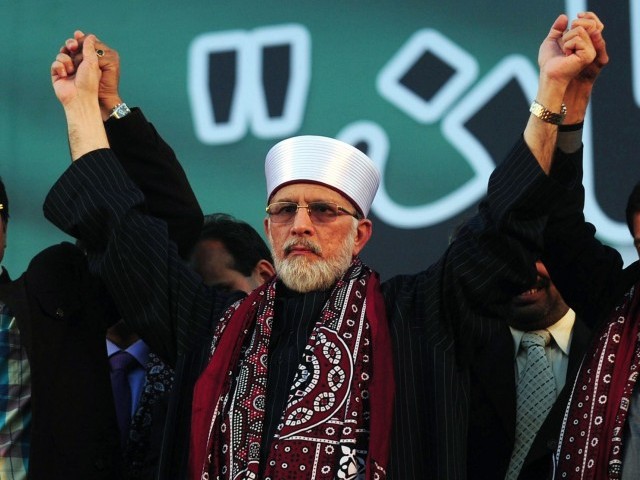 The only thing we know about Tahirul Qadri’s January 14 Long March in Islamabad is that it will be attended by a lot of people. We still don’t know who has gathered those people and if they are being paid to attend. We don’t know who is behind Qadri and what his ultimate game is. Most bizarre of all, we don’t even know exactly what Qadri is protesting against. He claims that the democratic system has failed Pakistan and what is needed is a long period of caretaker rule by technocrats, appointed in conjunction with the military and judiciary, before we can ‘clean up’ our system and hold democratic elections. These are hardly the kind of soul-stirring revolutionary words which bring people by the millions out to the streets and yet, if one is to take Qadri at face value, he has struck a vein and become one of the most popular political figures in the country.

There is reason to doubt the nobility of Qadri’s intentions. His rallies have simply been too well organised, brought out too many people for a previously marginal figure who has spent much of the last decade abroad and served the agenda of anti-democratic forces too well to simply be accepted as what they are. Even if Qadri is not directly supported by the military, they are surely cheering on the sidelines as this religious leader seeks to undermine a government that is at the fag end of its term. Elections are scheduled to be held in a few months and there is a process in place to appoint a caretaker government but Qadri would rather we do without the democratic process. For this alone he is a dangerous threat to our burgeoning democracy and thus should be treated warily by everyone. The MQM has finally, after a period of flip-flopping, decided not to support the Long March but that it ever considered doing so shows just how threatened our democracy may be, even by parties which constitute a critical part of it.

Qadri presents himself as a man of integrity but it must repeatedly be pointed out that he wants to essentially hold the Constitution in abeyance. The Constitution has specifically laid out the roadmap for conducting elections, which includes the appointment of a caretaker government for a specified period to be selected by our politicians. There is absolutely no provision in our Constitution for a caretaker set-up to be appointed indefinitely and there is certainly no role for the military or the judiciary to play here. Any appeal Qadri has should be strictly limited to those few people who actively want democracy to fail.

Even if Qadri’s intentions are taken as genuine and we assume that there is no malignant force behind him, his proposed solutions betray a certain ignorance and impatience. The biggest problem with our democracy today isn’t our politicians and political parties but that we simply haven’t given democracy the time it needs to take root and work. We gladly allow military dictators to rule over us with false promises for a decade but start yearning for quick fixes after trying out democracy for just a year. This is not the way to build political institutions. Instead, we should celebrate the fact that we are poised to hold consecutive elections for the first time and resist Qadri’s appeal to take the politicians out of politics. Putting aside our democratic system for now will only mean an even longer wait for much-needed improvements in the process. Qadri isn’t proposing any solutions; he just wants to kick the can down the road.

Every well-wisher of democracy should hope that Qadri’s Long March in Islamabad turns out to be a non-event. The last thing this country needs is a postponement of the scheduled elections. This will also be a test for our politicians, all of whom need to stand firm and united against Qadri and his desire to hold democracy hostage. Ultimately, we need to make sure that Qadri is not a harbinger of future events but merely a footnote at this momentous time in our history.