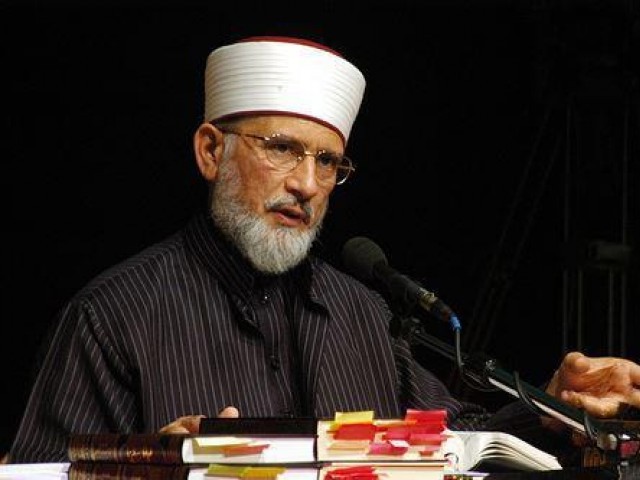 A file photo of MQI chief Tahirul Qadri taken during one of his religious lectures.

LAHORE / ISLAMABAD: Minhajul Quran International chief Tahirul Qadri on Friday said he will lead the long march to Islamabad at all costs.

“This march is not for me to get in power but a struggle for the people of Pakistan, who have been deprived of their rights,” he said.

Qadri was speaking to the media in Lahore.

Accusing the government of creating hindrances, Qadri said transporters have been pressurised against providing conveyance to the long march participants.

He said their licenses have been taken away from them, while many of the camps were removed.

“People have been harassed; not arrested though,” he explained.

Given the years long wave of terrorism in the country, Qadri said there are only two possibilities: either the government is supporting terrorists or it has completely failed to control them.

The MQI chief said that in both the scenarios, the government has no legal or moral authority to stay in power.

He further questioned if there is another explanation for the ongoing bloodshed.

Calling his complaint a public FIR, the MQI chief said the people of Pakistan should know who to blame in case of a mishap.

Recalling the war of Karbala, Qadri said no amount of pressure can stop him from carrying on with his plans as he was following the footsteps of Hazrat Imam Hussain (RA).

“I’m fighting against the Yazidi system, I’m heading towards Karbala,” he said.

He further said that he has summoned his family and close associates to inform them about his final will.

Kaira was speaking to the media in Islamabad.

He also appreciated the Muttahida Qaumi Movement’s (MQM) decision to not take part in the “million-man” march.