The former direct­or of JPMC was seeing patien­ts till a few weeks ago.
By Our Correspondent
Published: January 9, 2013
Tweet Email 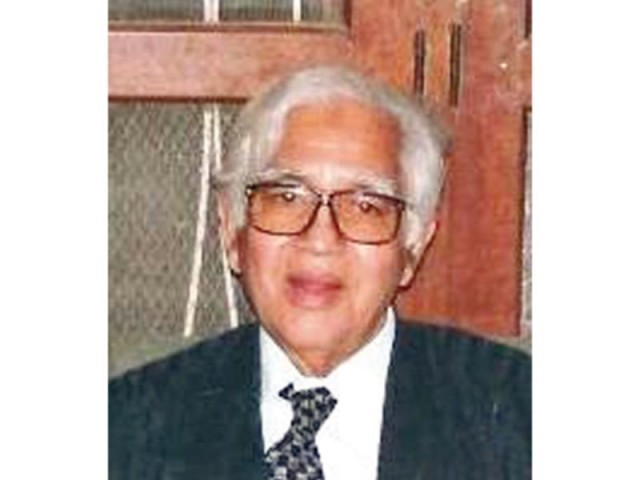 KARACHI: ZK Kazi, one of Pakistan’s first orthopaedic surgeons, worked literally till the last moments of his life. He passed away at the age of 92 on Tuesday after a brief illness, leaving behind thousands of admirers, doctors and well wishers who he treated in a career that spanned 60 years.

When he started out, orthopaedics was not a speciality and general surgeons performed all manner of procedures. But Dr Kazi, who had initially wanted to be an inventive engineer and grew up reading the magazine Popular Science, was drawn to this field because it combined these interests.

According to a citation prepared by his student Prof. Anisuddin Bhatti, Prof. Kazi created the department of orthopaedic surgery at Jinnah Central Hospital – the third such unit till then in Pakistan. His work in orthopaedics, paraplegia and the rehabilitation of paraplegic patients was internationally acknowledged by Sir Ludwig Guttman, the founder of the National Spinal Injury Centre in Elsberry, Buckinghamshire, in his book on spinal injuries.

He ran Jinnah hospital as its director briefly for a year in 1972 and was instrumental in the establishment of Sindh Medical College and the College of Physicians and Surgeons of Pakistan. And as was inevitable for medical pioneers in Pakistan at the time, he also formed an association for his speciality: the Pakistan Orthopaedic Association.

He retired as professor emeritus from JPMC in 1981 but continued to visit, prompted by a pride over being associated with the hospital for so long. “Prof. Kazi hardly missed the Friday meetings at Jinnah,” said Associate Prof. Dr Saeed Minhas. “He believed in clinical observation more than relying on fancy medical tests.”

The interactions with patients were a mix of professional questions and jokes, recalled Dr Minhas, who dedicated a chapter to Prof. Kazi in his book, ‘Woh mujh sey huey hamkalam’. “He made patients feel comfortable when he spoke to them. That is one quality I will never forget.”

Aside from his patients and work, the surgeon also took cricket rather seriously. In fact, he was the captain of the Pakistan Medical Association team and, according to Prof. Bhatti, their last match was played at the National Stadium. Back in the day they had teams for Jinnah and Civil hospitals too. “It was sort of like the rivalry between Oxford and Cambridge,” Prof. Kazi had said in an interview with The Friday Times in 2001. “There was a lot of hanky panky and dishonesty in recording runs.”

Prof. Kazi was seeing patients at his clinic at the Goolbano & Dr Burjor Anklesaria Nursing Home till December 17, according to his daughter Faiza, who has long taught English at St Joseph’s Convent High School. “That was just two days before he fell ill on December 19. His patients still call and ask when they can have an appointment.”

Work was life for him, explained his daughter Durriya, who heads the department of visual studies at Karachi University. “In the end, two people would [need to] help him get into the car but he would insist on keeping appointments at his clinic,” she said. “He would never let a patient wait.”

It was these old school values that people remember him by. He was always at hand to advise younger surgeons on difficult cases, he was at virtually every seminar and conference, he taught relentlessly and despite his stature, his name board at Anklesaria hospital was the quiet standard size, unlike the massive ones so in fashion today.

It was his principles that mattered most, whether it came to ensuring a patient was not charged in private if he was a Jinnah admission, or whether patient rights were to be upheld. Dr Badar Siddiqi recalled how Prof. Kazi managed one of the first strikes by doctors in Sindh during the 1970s: “He said he could either resign as president of the Pakistan Medical Association or the doctors could agree to a code of conduct for the strike.”

It is a testament to Prof. Kazi’s personality that not only Dr Badar Siddiqi, but other senior practitioners all described him in exactly the same words: an institution unto himself and a “thorough gentleman”. As Prof. Yunis Soomro had remarked about ZK Kazi in the 2001 interview: “He was the godfather of orthopaedics.”

His funeral prayers will be offered at Jinnah hospital after Zuhr and he will be buried at the PECHS graveyard. He is survived by his wife, Mrs Aziz Fatima Kazi, daughters Faiza Kazi, Durriya Kazi, Muna Pathan, son Salahuddin Kazi and several grandchildren.

Correction: An earlier version of this story contained a factual error. The error is regretted.