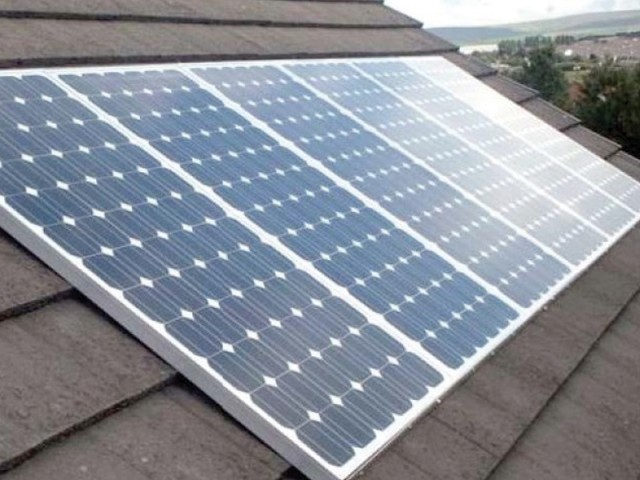 Several global experts believe that 2013 will be the year that solar energy becomes economically viable even without any government subsidies. PHOTO: FILE

German renewable energy company CAE plans to invest more than €100 million (Rs12.9 billion) in setting up the first solar panel manufacturing facility in Pakistan, and the second of its kind in Asia.

In an exclusive interview with The Express Tribune, Shahzada Khurram, the only Pakistani director of the company, shared its plans of becoming a leading supplier of renewable energy equipment in the country. “Pakistan is going through one of the worst energy crises, and it is time to think about renewable energy as a way to make good money in the sector,” said Khurram.

CAE, based in Germany, is owned by four partners, one of whom is Khurram. The other three are Renier Kertess (German), Anton Josef Hotz (Swiss), and Luigi Tassell (Italian). Khurram met them during his time as a student in Germany and Mexico. Khurram himself is from a family that has a background in textile manufacturing.

CAE plans to introduce a type of solar panel that has not been used in Pakistan before and is not manufactured anywhere else in Asia except one place in China. It will build a factory in Faisalabad on land that has been given to it by the University of Agriculture Faisalabad. In exchange, the university gets a 10% share in the company’s Pakistani subsidiary. Manufacturing is expected to start by the end of the year.

Solar energy prices are rapidly becoming more competitive with thermal energy sources. Several global experts believe that 2013 will be the year that solar energy becomes economically viable even without any government subsidies.

The problem with solar panels in Pakistan has hitherto been the fact that the upfront set-up cost is beyond the reach of most customers, even though the costs thereafter are miniscule. To smooth out that the cost curve, CAE has partnered with Faysal Bank and Meezan Bank to offer consumer financing options for people looking to install solar panels in their homes and offices. CAE claims it will offer a 25-year warranty for its products, allowing its customers to get extended time periods on their loans, which will reduce monthly payments.

“We are aiming to make sure that any person who installs the house solar system will have monthly instalments equal to their current monthly electricity bill,” said Khurram. Given the fact that grid electricity in Pakistan is cheap, but unreliable, it is likely that many will find that proposition highly tempting.

The collaboration with UAF has more to it than just the land: the company plans to help set up a new masters programme in Alternative Energy, the first of its kind in Pakistan, to help train enough professionals to serve the growing renewable energy field in the country. The new department at UAF will be called the Punjab Energy Centre for Technology and will have faculty members from Europe teaching courses, arranged for by CAE.

The company is confident that the venture will prove to be financially viable. Adeel Anwar, the finance director of the company, said that he expects its revenues to touch €150 million (Rs19.2 billion) within the first year. CAE officials feel they can then double that number within three years.

The first customer appears to be UAF itself, which is seeking to cut its average monthly electricity bill of approximately Rs10 million down to a Rs5 million instalment for CAE’s solar panels.

And the company appears to have products that are ready even for industrial use. CAE has already sold such a system to three textile manufacturers in Faisalabad: in Sandal Bar Fabrics, Tayyab Group of Industries, and Faisal Fabrics.

Other prospective customers include the city of Lahore for its street lights, and the Punjab government, which wants to convert 5,000-acre in the Cholistan desert into a 1,550-megawatt solar power station to supply electricity to the national grid. And the firm’s experiments in installing solar-panels for tube-wells for farmers also appear to have been largely successful.