Being benched is an embarrassment for me: Umar Akmal

Being benched is an embarrassment for me: Umar Akmal 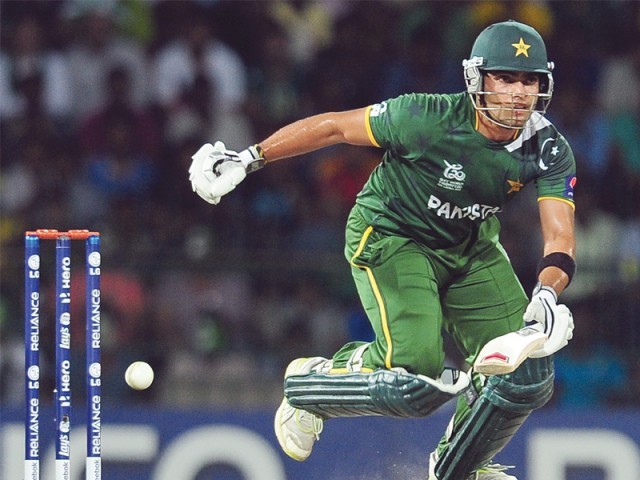 Umar, despite the critics calling for his sacking from all forms of the game, has vowed to give an improved show in the longest format of the game if he is given a chance to make a comeback against South Africa. PHOTO: AFP

Team combination, and not his form and unreliability, was the reason behind his omission from the opening two One-Day Internationals (ODIs) against India, according to Umar Akmal, as the mountain of expectations overwhelmed him in Delhi once again.

Umar was stumped for 25 off 50 balls, jumping down the pitch at a time when the required rate was just over four an over with the tail to follow. Pakistan went on to lose the next four wickets for just 33 runs and lose the match by 10. While Umar tried to justify his earlier omission, he was also content with his performance at Feroz Shah Kotla despite the effect his dismissal had on the result.

“You can’t really call the innings immature or irresponsible,” Umar told The Express Tribune ahead of the team’s departure from Delhi. “I’m trying and working hard to get rid of the aggression but if you look at my performance, you’ll hardly find a couple of matches where I haven’t been able to finish things off. Whenever the team has needed me, I have acted responsibly and taken it past the finish line.”

‘Took positives out of the omission’

Azhar Ali was preferred over Umar in the playing-XI for Chennai and Kolkata but with the former looking uneasy with the conditions and the new playing rules, Umar was drafted into the side. The snub, according to Umar, was embarrassing for him but he opted to look at the positives instead of sulking.

“I sat out after a long time and team combination was the reason why I wasn’t in the playing-XI. I wasn’t dropped. But I opted to take this as a positive sign and gave my effort in the field whenever I was needed as the 12th man.

“It does hurt when you’re not part of the team. It’s also embarrassing after you’re a regular member of the playing-XI and suddenly you find yourself on the bench. But as a professional, you need to perform in every match and not give the selectors or the team management any reason to not pick you for the next match.”

Umar’s show in Delhi, however, was slammed by Misbah as well as former players and coaches. The rush of blood and the ‘immaturity’ shown in the middle cost Pakistan the match, according to them, and the captain, in the post-match press conference, looked at bay while trying to describe what went wrong with youngster.

“We’re trying to talk to him and making him realise where he’s going wrong so many times,” Misbah had said earlier. “At this age, you think a big hit will ease the pressure. We’ll have to tell him how to go about pacing the innings and the importance of patience. It’ll be good for his career that he understands the situation while batting and not be rash.”

After scoring 820 runs in his first 20 international innings, Umar has scored just 410 in his last 20 with a highest of 55. Umar scored 855 runs in his maiden domestic season in 2008 – including a 258 and 186* – and followed that up with a century in just his third ODI and a 129 on Test debut in New Zealand in 2009. But with the emergence of Azhar Ali and Asad Shafiq – alongwith the presence of Misbah, Younus Khan and Shoaib Malik – his place in the playing-XI looks uncertain with every swipe of the bat.

Messi will be back for more: Iniesta