Rain expect­ed in Islama­bad and upper parts of the countr­y from Januar­y 11-19.
By Web Desk
Published: January 8, 2013
Tweet Email 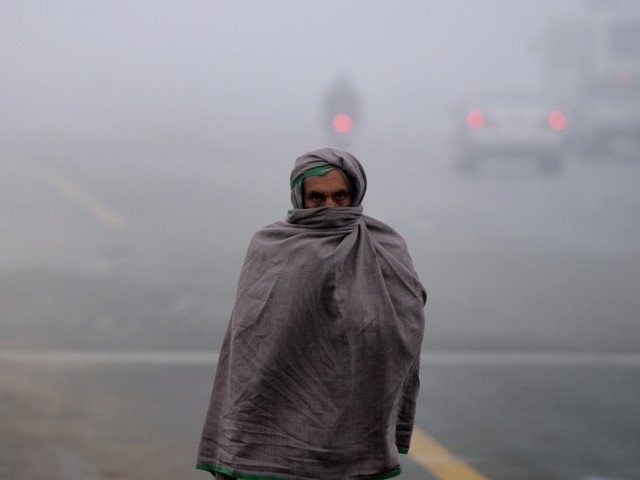 A Pakistani resident covers his body with a warm shawl as he walks along a street during a cold and foggy morning in Islamabad on January 8, 2013. PHOTO: AFP

The ongoing spell of cold in Islamabad is likely to get worse in upcoming days, in time for Tahirul Qadri’s long march planned for January 14.

Qadri, with support from Muttahida Qaumi Movement (MQM), has planned a “million-man march” calling people from across the country to join in to demand reforms in the electoral system.

According to Pakistan Meteorological Department (PMD), rain is expected in Islamabad and upper parts of the country from January 11-19. The new rain spell will help clear the heavy fog which is hindering air and motorway traffic in several cities.

Foggy and cold weather conditions are likely to continue over plain areas of Punjab, Khyber-Pakhtunkhwa, Larkana and Sukkur division over the next 24 hours.

Snowfall is also expected in the upper parts of the country and Margalla Hills in the next few days. According to a PMD official, the cold weather has broken the record of the past 50 years in certain regions.

The maximum temperature in Potohar region and Khyber-Pakhtunkhwa (K-P) has fallen to 14°C from 18°C.

An AFP picture shows a Pakistani pushing his cycle along a street during a cold and foggy morning in Islamabad on January 8, 2013.