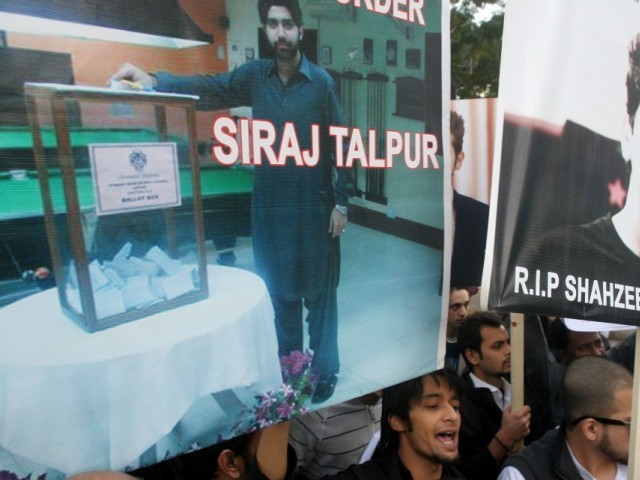 Shahzeb's killing resulted from an argument he had with Talpur, when the latter’s servant verbally harassed his sister. PHOTO: ATHAR KHAN/ THE EXPRESS TRIBUNE

The other suspect, Shahrukh Jatoi, is still at large.

The car from which Shahzeb was shot at was also recovered.

Shahzeb was shot dead near his home in Defence last week. A popular student and son of DSP Aurangzaib, Shahzeb’s murder created an uproar in civil society.

Chief Justice Iftikhar Muhammad Chaudhry on January 1 took suo motu notice of the murder and ordered for a report to be presented in court.

Shahzeb was killed allegedly by Shahrukh Jatoi near Mubarak Masjid in DHA on December 25.

The killing resulted from a small argument he had with Talpur, when the latter’s servant verbally harassed his sister.

Talpur and his friend, Jatoi, allegedly followed Shahzeb, even after the issue was settled, and shot him dead.

No US, Britain support for Qadri