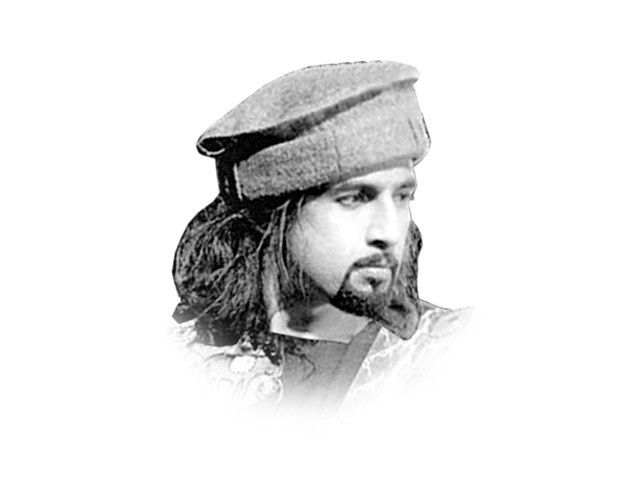 The writer founded the rock band Junoon and is author of the book, Rock & Roll Jihad. He tweets at @sufisal

up being governed by idiots.” — Plato

In his speech at Garhi Khuda Bakhsh on December 27, PPP Chairman Bilawal Bhutto-Zardari, 24, boasted about the party’s ‘proud’ record of bringing real justice to Pakistan. Three days earlier, 20-year-old Shahzeb Khan was brutally gunned down in Karachi by the sons of the same corrupt feudal elite that Bilawal represents. Shahzeb’s only ‘crime’ was defending the honour of his sister who was harassed while returning from a wedding. A verbal brawl broke out between Shahzeb and two absconding suspects. Shahzeb’s father, an officer in the Sindh Police, mediated the scuffle and implored both parties to back off. But power and money intoxicate and corrupt absolutely. The feudal sense of entitlement and revenge of both the accused — one said to be a Jatoi and the other a Talpur — emboldened them to act above the law and they did precisely that. Accompanied by armed guards, they followed Shahzeb’s car and allegedly pumped four bullets into the young man near Mubarak Masjid in Defence. This kind of senseless violence has become the norm in Pakistan.

The Pakistani feudal mindset symbolises injustice and greed and it is eating away at the heart and soul of the nation. Any Pakistani who challenges injustice does so with considerable risk to himself. As in the case of Shahzeb Khan, they often pay with their lives. The core problem plaguing Pakistani society is lack of accountability across the board. During the late 1990s, I recorded a song called Ehtesab and made a video that satirised Pakistani politicians and dictators whose corruption scandals were being reported internationally. The response of Bhutto-Zardari and Nawaz Sharif’s government was to ban the video and Junoon and threaten my life. However, I’m not the only Pakistani artist who has been punished for expressing the truth. One of Pakistan’s greatest Urdu poets, Faiz Ahmed Faiz, spent many years in jail for his anti-establishment views.

In Garhi Khuda Bakhsh , Bilawal’s speech-writers thought it appropriate to recall Faiz’s poem Bol. Had Bilawal actually understood the Urdu poetry he was reading with a gora accent, he would’ve known Faiz’s poetic legacy has been to speak truth to power. Faiz sahib condemned authoritarianism and class warfare and struggled for the rights of the downtrodden. The revolutionary poet today would be shocked to hear that a privileged son of a flawed president was cynically co-opting his poem of freedom and justice. To add insult to injury, both Bilawal and his father demanded five more years of democratic revenge from the people of Pakistan.

Since the death of Benazir Bhutto, President Asif Ali Zardari and Bilawal cynically extort sympathy votes from the nation and yet, are impotent in protecting the lives of ordinary Pakistanis. If losing a family member was the criterion for democratic rule, America’s Kennedy family should’ve been in power in the US ever since the assassinations of John and Robert Kennedy in the 1960s. Pakistan needs democracy, not dynasty. As Shahzeb’s wanton murder illustrates, the last five years under President Zardari have been the rule of the gangster rather than the rule of law. How can he call himself a democrat while appointing his son as chairman of the PPP for life? His time as the president of Pakistan has brought staggering levels of violence, corruption and graft. He is accused both by Fatima and Ghinwa Bhutto of murdering his own brother-in-law Murtaza, who challenged his power during Benazir Bhutto’s second term.

The Holy Quran says: “Killing one innocent person is like killing the whole of humanity”. If that allegory was applied to Pakistan, we would be mourning the death of life itself. How many innocent Pakistanis have to die before President Zardari can hear the cry for justice?

Pakistan’s future lies with neither of these ‘DNA democrats’. The key to moving forward lies in the genesis of Pakistan’s freedom movement: Our nation’s founder, Muhammad Ali Jinnah, struggled and sacrificed to win our independence from Britain, setting clear examples of legal and political activism. Jinnah was a constitutional lawyer who was inspired by Islamic values of social justice. Sixty five years later, my generation sees Jinnah’s tenacity, incorruptibility and idealism embodied in the leadership of Imran Khan. The main battle in the forthcoming 2013 national elections will be between the saviours of dynasty and the people’s Junoon for justice.