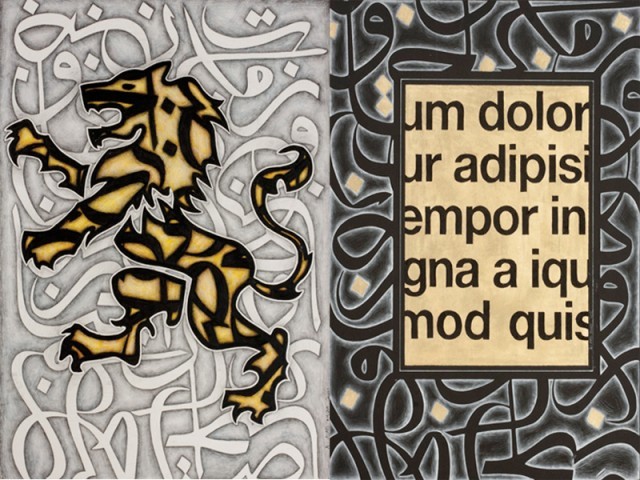 The Islamic texts have been taken from 16th century Turkish writings. Traditional symbols and motifs of the two cultures have been included.

LAHORE: As many as 24 calligraphy pieces by Ali Asad Naqvi at the Drawing Room Art Gallery trace roots of Islamic and Western civilisations. The work combines words of ancient Latin and Arabic texts.

This is the first solo show by Naqvi, 26. He says: “I wanted to show my inclination towards merging the scripts – Latin and Arabic – that form the basis of Western and Islamic civilisations.”

The Islamic texts have been taken from 16th century Turkish writings. Traditional symbols and motifs of the two cultures have been included.

These include the lion (Mughal era and English flag of the 11th century), lotus (in Mughal-era Quranic manuscripts), floral patterns (in inlays and frescos) and steam engine (associated with industrial revolution).

“Both languages have historically been written on Safha (page). That’s why I have used the format. I just sought to present these symbols in a new, a more interactive, manner,” he said. “It is for this reason that the letters have been merged with symbols, popular in both cultures,” he said.

For most pieces, Naqvi has incorporated metallic texture through heavy use of silver, gold and bronze leaves. Turquoise and shades of gray are frequent. Colour pencils, graphite and acrylics have also been used.

“Being a print-making student, one of the main challenges for me is to be innovative while keeping the number of colours used down,” he said.

The exhibition opened on December 21 and will run until December 31 (today). Four paintings have been sold. Naqvi plans to display the remaining works in Islamabad and Karachi.

Naqvi has studied print-making at the National College of Arts. He graduated in 2010.

He also holds a diploma in traditional calligraphy and Turkish illumination from the NCA. He has been displaying his works in group shows since 2010.