Coming from a strong politi­cal backgr­ound, the late minist­er voiced his ambiti­ons at an early age.
By Manzoor Ali
Published: December 23, 2012
Tweet Email 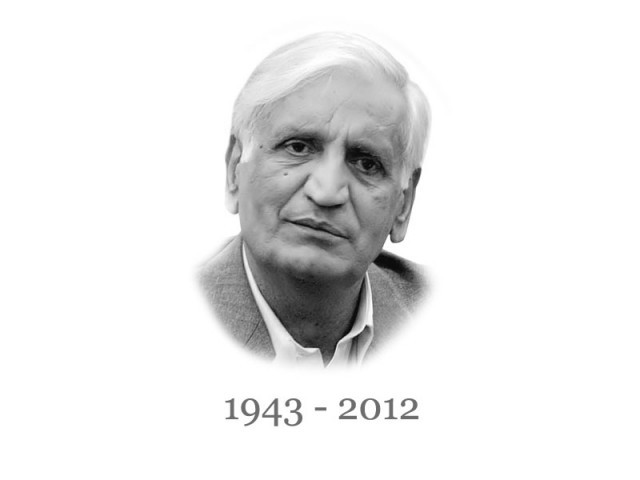 True to his words, Bashir Ahmed Bilour paid for his political ideals with his life.

Though a soft-spoken and popular politician, Bilour had a potent voice, which he used to publicly denounce the scourge of terrorism.  And while it earned him the ire of the Taliban, he never shied away from his duties. Be it inspecting the scene of a suicide attack or consoling families of victims, Bilour was always the first to rush to the scene.

It was for this reason that he was twice targeted in suicide attacks during the past few years. His residence also came under attack when militants fired rockets at his house.

Bilour was born on August 1, 1943, in Peshawar. He passed out from the Government Higher Secondary School (GHSS) No 1, Peshawar Cantonment in 1958, and in 1965 graduated from the prestigious University of Peshawar with an LLB degree.

In 1969, he married the daughter of Haji Gul Mohammad popularly known as Gul Babu, a prominent personality of Peshawar.

The Bilour family is widely regarded as ANP’s strongest political fort in Peshawar. Its political clout in the provincial capital is undisputed. So, it is little wonder that Bilour was inclined towards politics since his earliest days.

“It was in 1952, when we were studying in 5th grade, he used to tell me ‘I will become a big name in the future,’” Bilour’s cousin Ishtiaq Ahmed recollects.

Bilour started taking a keen interest in politics in the early 1970s from the now defunct National Awami Party (NAP) platform. Interestingly, Bashir Bilour was imprisoned along with his three brothers after Zulfikar Ali Bhutto’s government banned the NAP in 1975. Bilour rose to prominence in 1977, when he was appointed Awami National Party’s general secretary. Later, he was also made party’s senior vice president.

He served as the party’s acting president twice – once after the resignation of Begum Nasim Wali Khan and the other time, after Afzal Khan Lala stepped down.

Bilour has also served as the provincial president of the ANP two times in his career.

Perhaps the most striking aspect of Bilour’s political career was his unbeaten track record in electoral politics. His family did not participate in the 1985 elections, but Haji Ghulam Ahmed Bilour and Bashir Ahmed Bilour contested the 1988 general elections. While Bilour lost to Pakistan Peoples Party member Syed Ayub Shah, the defeat would prove to be uncharacteristic of him. He won the provincial assembly constituency PK-III five times in a row: in 1990, 1993, 1997, 2002, 2008 elections.

Interestingly, he was among the few ANP stalwarts who held their fort when the Muttahida Majlis-e-Amal (MMA) swept the 2002 elections in the province, then known as the North West Frontier Province.

Bilour has held several portfolios as a minister. Following the 2008 elections, he was expected to be made the chief minister, a post later offered to Amir Haider Khan Hoti. Instead, he was made the parliamentary leader of ANP in the K-P Assembly and senior minister for local government and rural development.

Many took him to be the face of the provincial assembly and he actively voiced concerns in all matters of legislation.

Bashir Bilour is survived by two sons and three daughters.